You are here: Home / Community / Old-time skiers hit the slopes to stay young

This week, I’m profiling a group of extraordinary gentlemen who prove you’re never too old to have fun.

My Monday morning was definitely not typical when I showed up at Hidden Valley Highlands Ski Area to talk with a bunch of old-time skiers.

I found them in the Members’ Lounge. There was a group of them and I could hear some laughing and carrying on. I introduced myself and they all got up like true gentlemen to shake my hand. Then I sat at their table and opened my notebook.

What’s so unique about these skiers is that they are all seniors ranging in ages from 62 to 92. Many of them have been long-time Muskoka Ski Club members and Monday mornings are generally when they are all meeting up. After hitting the slopes, they head in for a break and to shoot the breeze.

They are a lively bunch and all of them will agree that if you don’t use it, you lose it. Staying active keeps you healthy and happy. Each of them will attest that when it comes to skiing, sunny days are always the best. Even if it’s cold, as long as the sun is shining it’s a good day to be hitting the slopes.

“We’re actually writing each other’s eulogies,” jokes Ken Raven, who’s been a long-time member of the ski club and is the eldest of the bunch at 92. He was a pilot in WWII and he’s also the grandfather of Olympic downhill skiing champion Dara Howell. It makes me realize the apple doesn’t fall far from the tree in this family.

When I asked him what keeps him young, he replies, “I married a younger woman… 20 years younger.”

He’s got a patch on his forehead and I’m not sure what happened to him. Maybe he bonked his head, I think to myself. But then one of his friends jokingly points out that Ken is wearing a Viagra patch. They all bust a gut. I determine that I’m dealing with a witty bunch of old guys who all have a great sense of humour.

The guys are all sitting around a table with coffee mugs and there’s a few newspapers, too. No one is texting or has a phone in their hand so it’s apparent they’re all tuned into each other. They’re old school like that. I arrived at coffee hour, they tell me. At the table sits Colin Oke, 74, who was a ski instructor at Hidden Valley for more than 45 years and is also a former Huntsville High School teacher. Joe Spiers, 81, and Peter Wood, 79, are long-time ski members. I take a mental note that Peter is always smiling. He seems so friendly and full of life for an older guy. He’s never missed a year of skiing at the hill since the 1960s. Bryan Young, also referred to as Cubby, although I never learn how he acquired the nickname because apparently it’s a long story. Ken Farnsworth, 70, worked at Hidden Valley for over 30 years as the manager of outdoor operations. As a teenager, he remembers grooming the trails on snowshoes. Wow. Imagine that? Must have been some workout.

He says he became an avid skier when he retired back in 2000.

“I really enjoyed it,” he says of his job. “With the changing seasons, there was always something different going on. I was never stuck in the same seat for 12 months. I had a lot of responsibilities.”

As Murray Ruby enters the Members’ Lounge, someone announces, “God just showed up.”

They all turn and laugh. Murray owned Ruby’s Men’s Wear downtown for 47 years. He’s a cute, elderly man and he has kind eyes that look like they’ve seen it all. He’s 90, and like Ken Raven, Murray was in the airforce during the war. He was one of the first members of Hidden Valley’s board of directors.

“Where’s your snow gear?” I ask him. I notice right away he isn’t wearing ski boots and snowpants like his buddies.

“I took a fall on the 5th Avenue two years ago,” he tells me. He hasn’t been back on skis since. He doesn’t seem too bummed out, though. He still plays tennis. He’s here to enjoy the company of his close friends and a cup of coffee.

Last to join the table is Peter Jarvis, the youngest of the bunch. He’s been skiing at Hidden Valley since he was a small boy and was a ski instructor there as well. His parents were some of the first members of the ski club and his dad was also one of the original founders of Hidden Valley. His leg was injured in a car accident and then he officially put his skis away last year when he hurt his knee skiing in British Columbia in “powder that wasn’t so powdery.”

“We had a couple great years of skiing there [Hidden Valley] while all the families were building lots,” he says.

Peter Wood walks me over the some plaques hanging on the wall and points to his name and the date when he held the position of the president for two years. He seems proud and he has a lot of nice things to say about the ski club.

“It’s a real family club,” he says. “When you become a member, kids can join for 25 percent of the going rate. That’s a real incentive. We have our grandchildren coming here from the city on the weekends and now my granddaughter’s teaching lessons.” 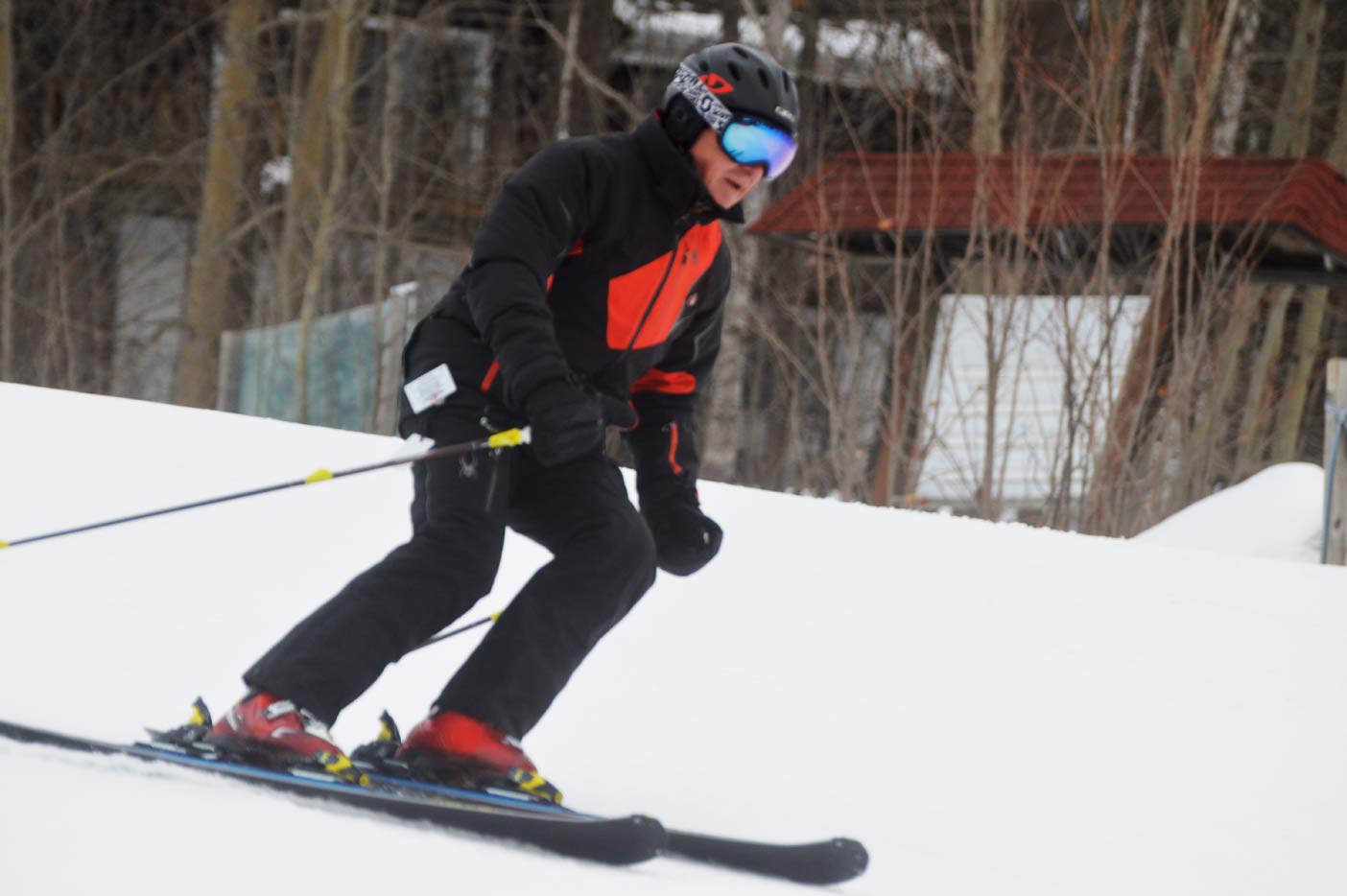 At 92 years young, Ken Raven’s still got it going on on the slopes. 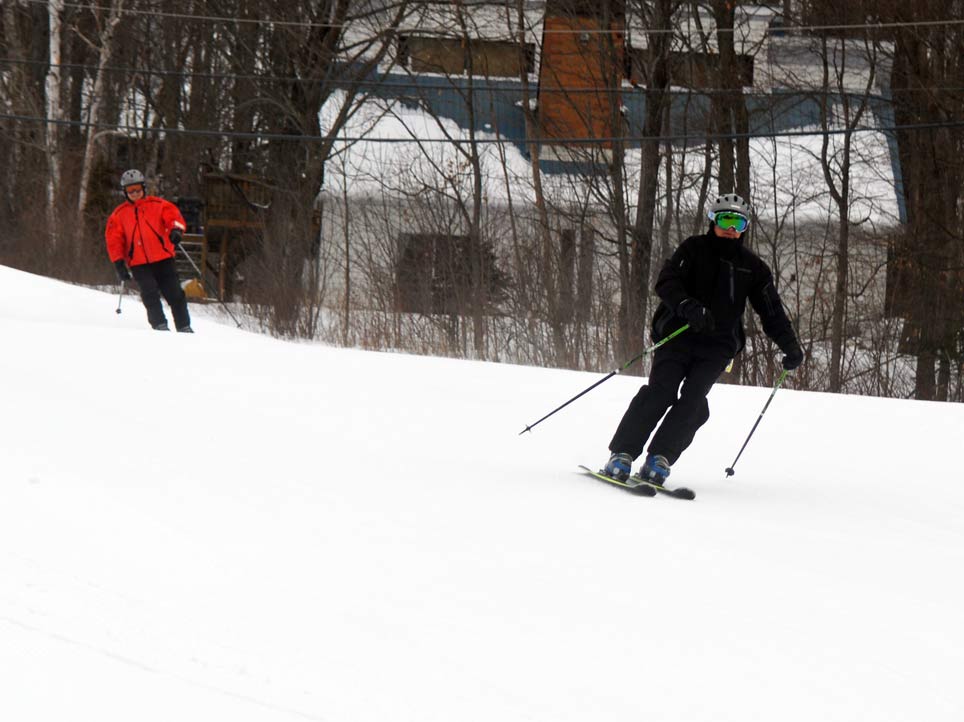 Seeing the old boys hit the slopes was definitely inspiring.

To me, it seems like things have come full circle for most of these old-time skiers passing their love for the slopes along to the children and grandchildren.

Before I leave, Ken Farnsworth takes me into the original chalet lounge where some old photos are displayed. It’s a trip back in time to see how things have changed since the hill first opened decades ago. There’s a shot of some of the ski club’s first members and some aerial views of the property that Hidden Valley is situated on. There’s a picture of an old-school double chair lift and snow being made in the background. We move onto another wall where there are photos of people being pulled up a hill by a tow rope and the original chalet before an addition was built in 1965.

It’s always neat to see how times change. But the highlight of my Monday morning was definitely sitting with a bunch of old guys reminiscing about their early days on the slopes and how it continues to keep them young.