For the past several years Muskoka firefighters have been able to receive valuable propane handling training right here in their community – instead of driving hours elsewhere – thanks to two local companies.

For years, Budget Propane and Moore Propane were donating $5,000 each, annually, to send Huntsville/Lake of Bays firefighters to Blyth for training in handling liquid hydrocarbon. “My discussion was, if you’re giving me $5,000 and you’re giving me $5,000, and I’m sending four people, I can take that $10,000 and train 24 people in the level one right here,” said Gary Monahan, Deputy Chief with Huntsville/Lake of Bays Fire Department. “It’s Muskoka-wide now so all six municipalities get to send four members to do the level one and get hands-on training.”

Monahan is proud of the relationship the fire department has with the two propane companies. “We have a good relationship with Budget and Moore. We can call them at any time if we have a structure fire and if they have a tech in the region they’ll come in and help us isolate it,” he said.

Monahan said the number of fire calls related to propane incidents have increased. “The majority of people in the country have propane. Whether it’s a cottage fire, where the propane tank is against the structure, which could cause a bleve [boiling liquid expanding vapor explosion], or a leak, we’re getting enough members now that are trained to be able to handle it,” he said. ” We’re dealing with two different types of propane: liquid and vapour. Liquid is very volatile if it’s not handled properly and they teach us how to handle it.”

Monahan recalled an incident in Baysville four years ago at the Lake of Bays Brewing Company. “There were six or eight 420-pound tanks that started leaking so it would have been massive if there was an ignition source. The crew went in and were able to advance on the tanks and shut the leaks off and disperse the liquid vapour,” he said, noting some members on the department had just completed their training in Blyth. “Training is invaluable. I wish I could get everybody through this course. We will eventually.”

The training is conducted by Emergency Response Assistance Canada (ERAC), which focuses on training people across the country in flammable gases and liquids. The training was a two-day course located at Station 3 in Port Sydney.

“The hands-on training through dry runs to get the techniques down was a great idea,” said Ryan Elbe, a firefighter with Station 3 on the Huntsville/Lake of Bays Fire Department. “Then the live fire kicked in and working as a team was even more relevant, especially when we were right in the action. I thought running through the two scenarios focused on what we as a local fire department would run into with most of our propane calls.” 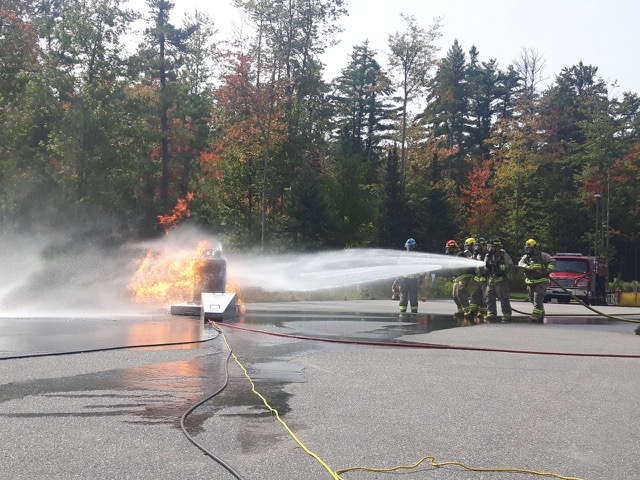 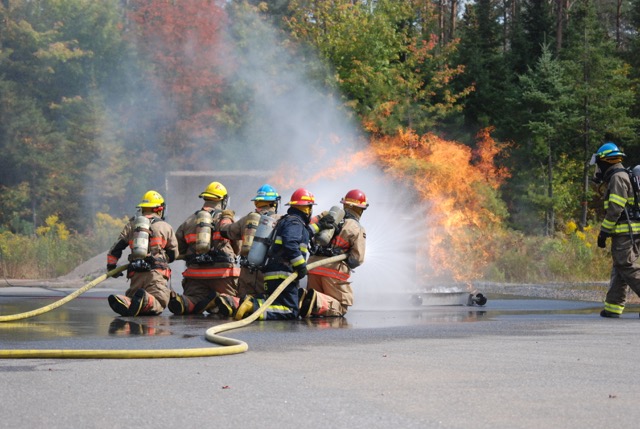 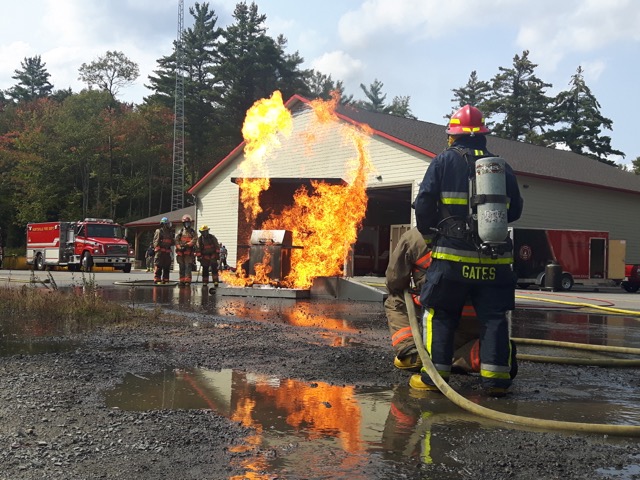 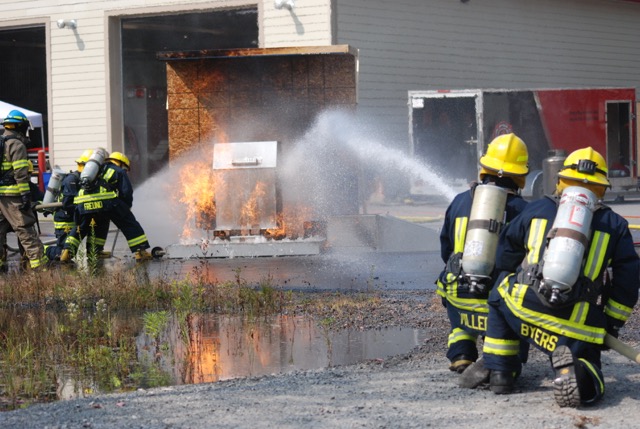 The first scenario had firefighters form an attack line against a 420-pound propane tank with large flames. In the second scenario the teams took on a barbecue fire, treating it like it was on a deck. Elbe said having the technical instructor on site for day two to share his knowledge and answer any other questions they had was a nice touch.

Going forward this training gives us a solid understanding of what to expect when we get on scene to a similar situation. It helps us focus and assess all the actual dangers, instead of getting a little complacent and just jumping right in. Us having this training helps in a leadership role with others on the department to help keep the crew safe, as well as educating internally.
Station 3 firefighter, Ryan Elbe

Monahan’s next goal is to build a site at Station 3 to offer the level two course. “The level two gets into the officer command level. In Blyth they have a train that is laying on its side and underground liquid propane going to it.” With a level two, officers are required to assess the overall situation and how, or if, the crew can attack it.
“I think we can get there, it’s just a matter of time,” said Monahan.