Some readers may know Huntsville pharmacist Bill Coon as an affable and knowledgeable part of Huntsville’s health care mix but thousands of participants in the annual Terry Fox Run know him as the long-time organizer of the event.

After 20 years on the committee and 10 years as the organizer, Coon feels that it is time for a new hand on the helm of the organization. “It is time for someone else to experience the same sense of pride and awe in our community that I have felt for all these years.” He gets a little emotional as he downplays his contribution to the Terry Fox Run and focuses on what it has given to him. “Each year as the participants head out I hang back and take a moment to reflect on who they may be running, walking or biking for prior to joining them. It is just so moving to be a part of that.”

Coon is gratified by the relationships he’s formed and the people he has met locally and as a part of the Terry Fox Foundation. “I would never have met some of these exceptional people had it not been for my involvement in the run.

As to what it takes to run the event, he says, “You need to be organized, able to delegate and to care about the cause. Aside from the week or so prior to the run it really isn’t onerous.” He laughs, “When I think about it, I actually don’t have some of the strengths you ideally need.”

Coon knows that many people remain very aware of what Terry Fox accomplished and inspired. He believes that it is as imperative to pass on the message of Terry Fox to a younger generation as it is to raise funds. “I’d love to see some younger, social media savvy people take up the torch,” he urges. “People of all ages are welcome but the demographic that is least represented is the younger one.” He adds, “There is always a danger of losing ground especially after so many years. Our volunteer base remains robust, but the participation is dwindling just a bit every year.”

Terry Fox is my Canadian hero. His single, selfless act personifies for me what Canada is all about, which is caring for each other.Bill Coon

Coon is a very nice guy but he doesn’t shy away from controversy either. He reflects on the few times that he’s been challenged as to the benefit of fund-raising for cancer since there seems to be more of it all the time. He carefully explains, “What I remind people is that we are living longer so the opportunity to get cancer is increased. Plus, diagnosing of cancer is happening earlier so it’s being treated sooner. In the past, someone might have died before they were diagnosed.” He concludes his defense of raising funds for cancer with one poignant fact: Terry Fox had osteogenic sarcoma, which when he was diagnosed had a 20 per cent survival rate. Today the rate of success for that cancer is 80 per cent. Progress is being made.

Bill Coon has participated in the Terry Fox Run almost every year since it began in 1981. He has one regret: in 1980 Terry Fox’s route brought him to within 20 minutes of Coon’s parents’ home in Caledonia. He didn’t go to see him. He shakes his head, “I wasn’t working, I had nothing really important going on but I just didn’t make the effort.” He sighs, “It was a long time ago but I live with that. And I learned a lesson from it.” 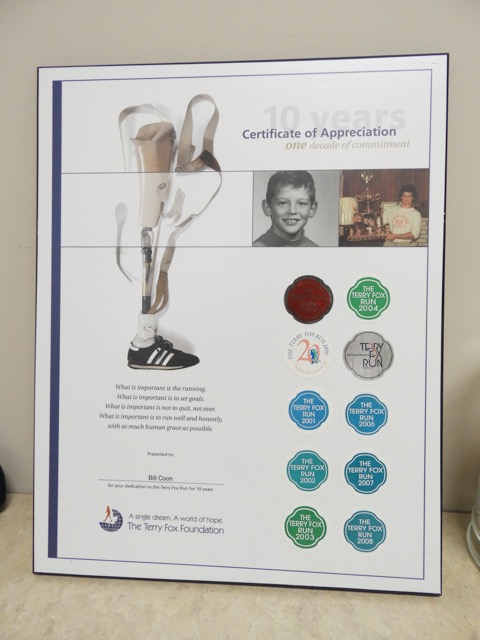 When Bill and his pharmacist wife Barbara moved to Huntsville in 1990 they became partners with Paul Whitehead in Muskoka Medical Centre Pharmacy. He’s aware that some people see pharmacists as ‘pill pushers’ but he strongly believes that medication is only one part of the health solution. “Pharmacists are very accessible and all about building relationships so I think that old view of us is changing.” Consequently, he has developed a strong personal and professional interest in health and fitness.

Bill, Barbara and their now grown two children all participated annually in the Terry Fox Run. He says, “Barbara’s support has been invaluable in the years I’ve been involved with the Terry Fox Run. Not only does she hold down the fort when I’m busy, but now she knows as much about it as I do and can answer questions when participants or volunteers call the house.”

Coon likes being seen biking and running around town, not for any reasons of ego, but since he recommends that everyone move a little every day, he feels it’s important to be seen ‘walking the talk.’

He’s a triathlete too but when asked if he’s competitive, he laughs, “Not even a little bit. I could not care any less about where I finish. I meet a few times a week with my peer group to swim, bike or run for fun and camaraderie.” He grins, “When we’re in more serious training mode it almost ruins the social aspect!”

Coon writes a Doppler column called ‘Bill’s Capsule Comments’ that provides a wide range of current health care information. He says, “While people are more knowledgeable and more involved with their own health these days, I feel that we fight the fight against ‘Dr.’ Google every day. The Internet is great but there’s a lot of bad information there too.”

Plans for the future include working a little bit less. Retirement is in the distance so even before that he’d like to do some active travel. “A bike tour comes to mind,” Bill says. Even in recreation he plans to ‘just keep moving.’

And if anyone is thinking about getting involved at a higher level with the Terry Fox Run, call Bill Coon! He’d love to tell you all about it and to help you get started on your own awesome Terry Fox adventure.