According to Muskoka Digital Archives, “This school was known as Central School and later as the “White School”. The wood frame building with a stone foundation was built in 1888 by Fred Francis at a cost of $3,995. In 1886 a school board had been formed of F.W. Clearwater, J. Matthews, H.S. May, J.R. Reece and R. Scarlett, with Mr. Reece as Chairman. They purchased a two-acre parcel of land on Centre Street from Allan Shay for $500 and took steps to build a frame building to accomodate 250 scholars. In 1905 a new school was built to the east of this building. It was designed by William Proudfoot and built by W.G. Hunt.

“C.O. Shaw, who also owned Bigwin Inn on Lake of Bays, purchased the original school building in 1908 for $1,000. Until 1915 it was used as a tenement house for employees of the Anglo Canadian Leather Company. In 1915 it became the practise hall and club house for the members of the Anglo Canadian Leather Company Band. The band was world renowned as C.O. Shaw was able to attract the best musicians from all over North America.

“The Board of Education purchased the building back again in 1929, for $3,000, when the 1905 brick school was getting overcrowded. It was used for grades one and two.

“The building was later purchased by the Rotary Club of Huntsville for the Muskoka Museum which opened in July 1958. After the building was demolished in 1966 to build the new Huntsville Public School, the museum moved to 31 acres of land adjoining Memorial Park in 1967.

“This postcard shows a very pretty school but most of its life it was in disrepair.” 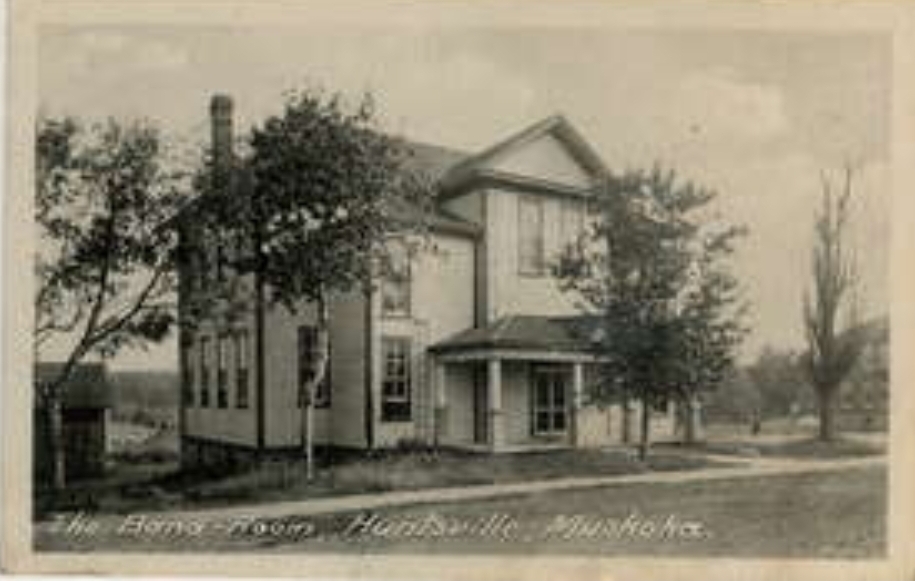