The first car appeared on the streets of Huntsville in 1910, owned by Dr. Hart. A year later, R.J. Hutcheson bought the second. Here, the Lorenzo Howell family is pictured in Hutcheson’s car in about 1912. To gas up, cars drove to the Huntsville Hardware store (later Hern Hardware), which kept fuel primarily for motorboats. “We dashed outside and unlocked the door to the gasoline house,” Sam Forsythe later recalled. “The barrel was set up like a vinegar barrel  you have seen in the corner grocers. We filled a gallon measure, grabbed a funnel and a chamois cloth and strained the gasoline into the car through the chamois cloth. I suppose we could put five gallons into the doctor’s car in from 20 minutes to half an hour.” Hern Hardware received council’s permission to put up the town’s first gasoline “hydrant” on March 3, 1914, assuming all liability for damage or accident. (Details from Huntsville: With Spirit and Resolve; photo courtesy of Janet and David Fisher.) 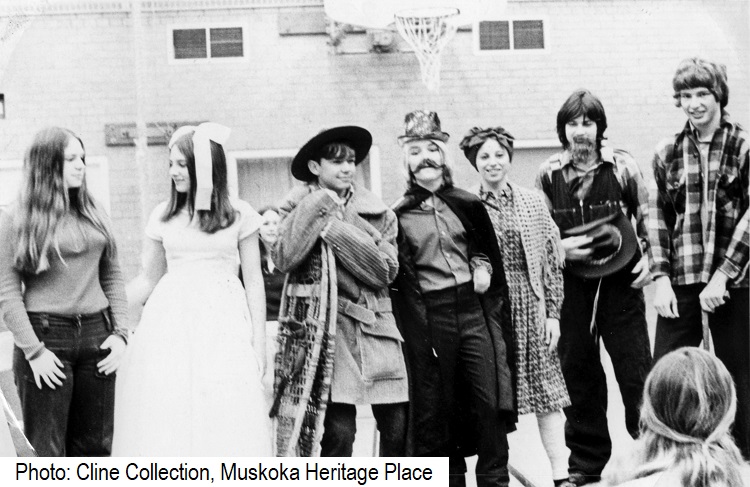 We didn’t have information about this photo, but Melanie (Beacom) McLennan came to the rescue via the ‘Huntsville Public/High School in the 70s’ group on Facebook:
“Haha! Oh my, this brings back memories! I think left to right is Faye French, Melanie Beacom, Mike Magdy, John Mighton, Bonnie Green, Peter Robertson and Mike Hayward. This was a play that I think we wrote in Theatre Arts and performed for the high school twice and I believe we took it to Huntsville Public for at least one performance. It was a story (sorry – can’t remember the title) about a hardscrabble couple (Mike and Bonnie) and their daughter (Me) who were being evicted by their greedy landlord (John) for not being able to pay the rent. Of course the landlord would accept the daughter as his wife in lieu of rent. Of course, this was against their will, hence a damsel in distress. The local RCMP officer (Mike) arrived to save the day and woo the girl. I think Faye was our narrator.
I believe this would have been about Grade 10.“ (Fall of 1971 or 1972.)

Thanks, Melanie! (And to Kelly McCaw for sharing her response with us.)