You are here: Home / Community / The gift of life: Meet Shelley Martin

It’s the start of a new year and Shelley Martin is counting her blessings. She’s looking good and feeling better than she has in years.

The young man Shelley will forever be grateful to is her son, Curtis. Back in September, he helped change his mom’s life for the better by giving her one of his kidneys. They have always shared a special bond, but now they are closer than ever. She’s still in awe of her son’s selfless decision to help her. It’s not hard for her to get choked up.

“He’s my hero, my brave hero,” she says. You can hear how proud she is. It’s a no-brainer. Without her son doing what he did, “life wouldn’t be as peachy as it is right now.”

Shelley has Alport’s Syndrome, a disease which damages the tiny blood vessels in your kidneys and can often lead to kidney disease and failure. Even though Shelley has struggled with the disease for most of her life, she was lucky to be able to have a daughter, Candice, in 1981. But a few years later, her kidneys quit functioning altogether and she received her “first gift” of a kidney transplant. She never met the donor, who shared a perfect tissue match to Shelley’s blood. Life was good and a few years after the transplant she had Curtis. Shelley explains that while both of her kids are carriers of the Alport gene, they don’t have the condition that she has, which is the only reason her son was able to donate a kidney to her.

“It’s the gift that keeps on giving,” she says of organ donations. It sounds cliché, she knows. But it’s so true.

As her kidneys began to fail due to them reaching the end of their life span (24 years), she opted for home dialysis treatment – something that is not for everyone as it’s a time-consuming process. There’s no nurse on hand, so every day. five days a week, Shelley spent 45 minutes preparing to go on dialysis. She was the first person in Ontario to use a NX Stage night dialysis machine, allowing her to do her own treatments in the comfort of her own home while she slept. Still, she went about her days feeling “bone tired” and was robbed of the freedom to be able to stay up late or do things like go camping with her family. She owns Muskoka Hearing Aids in town and with her health declining it became extremely difficult for her to be able to get up and go to work.

Her husband, John, was like her nurse. He did everything he could to make things easier for her. Having a good support system is huge, says Shelley. Sometimes that’s the only thing that can help you get through the day. Her sister, Linda Rowe, who she worked with and was a strong voice and advocate in the community for organ donation, passed away from kidney failure three years ago. Shelley misses her tremendously. They both had Alport Syndrome and acted as a pillar of strength to one another.

Being that sick for that long was really hard on me. There were times when I thought, ‘I can’t do this anymore.’ I pray a lot and I know there are lots of people worse off than me, even in my weakest and darkest moments. You have to count your blessings.

In 2012, Curtis had expressed his desire to want to help his mom. But he was only 20 at the time and Shelley wanted him to finish college. She didn’t want that weighing on his mind. She was hoping that another donor would come through. In 2013, she had a kidney removed as she was experiencing high fevers, chills and repeated trips to the hospital as a result of the kidney no longer functioning. A year later, when Curtis finished his schooling, discussion about the possibility of him donating a kidney got serious. He then began to undergo the rigorous testing to become a kidney donor. His tissue wasn’t a perfect match, like Shelley’s previous donor, but Curtis was young and healthy and willing to have the surgery. The kidney transplant was successful and Shelley is no longer on dialysis. She’s got her groove back. She has pep in her step and she’s smiling more. She went back to work as soon as she started to feel better. She’s experiencing freedom again with no more limitations and diet restrictions. She can stay up late if she wants to and visit the family lodge for days or weeks at a time. She can visit her grandson, Alex, in Timmins, ON and not have to worry if there’s availability at the hospital for dialysis treatments.

The kidney Curtis gave him mom will have a life span of five to ten years. And then fingers crossed that she will be able to receive another donated “gift”.

“The way I see it is that she gave me life, so this was a way I could give life back to her,” says Curtis. He’s so soft-spoken and seems a bit shy to talk about the fact that he really is his mom’s hero. “I was nervous the day of the surgery for sure and it was a struggle to get out of bed for the first few days after. I actually just started feeling like myself again, but I went back to work after three weeks. But yeah, if I could, I would do it again. It’s nice to have her back… not seeing her hooked up to a machine every night. There’s less stress in the house. She looks younger. She’s happy again.”

Like his mom and late aunt, Curtis is aware of the importance of organ donations. They can save a life. He also remembers one of his old babysitters, a man named Chester who had a double lung transplant, telling him why people need to be made aware that there’s a great need to be filled for donors. The man’s words of wisdom stuck.

“Why bury a good part?” asks Curtis. “Would you bury a new car with perfectly good parts or give it to someone who needs it?” 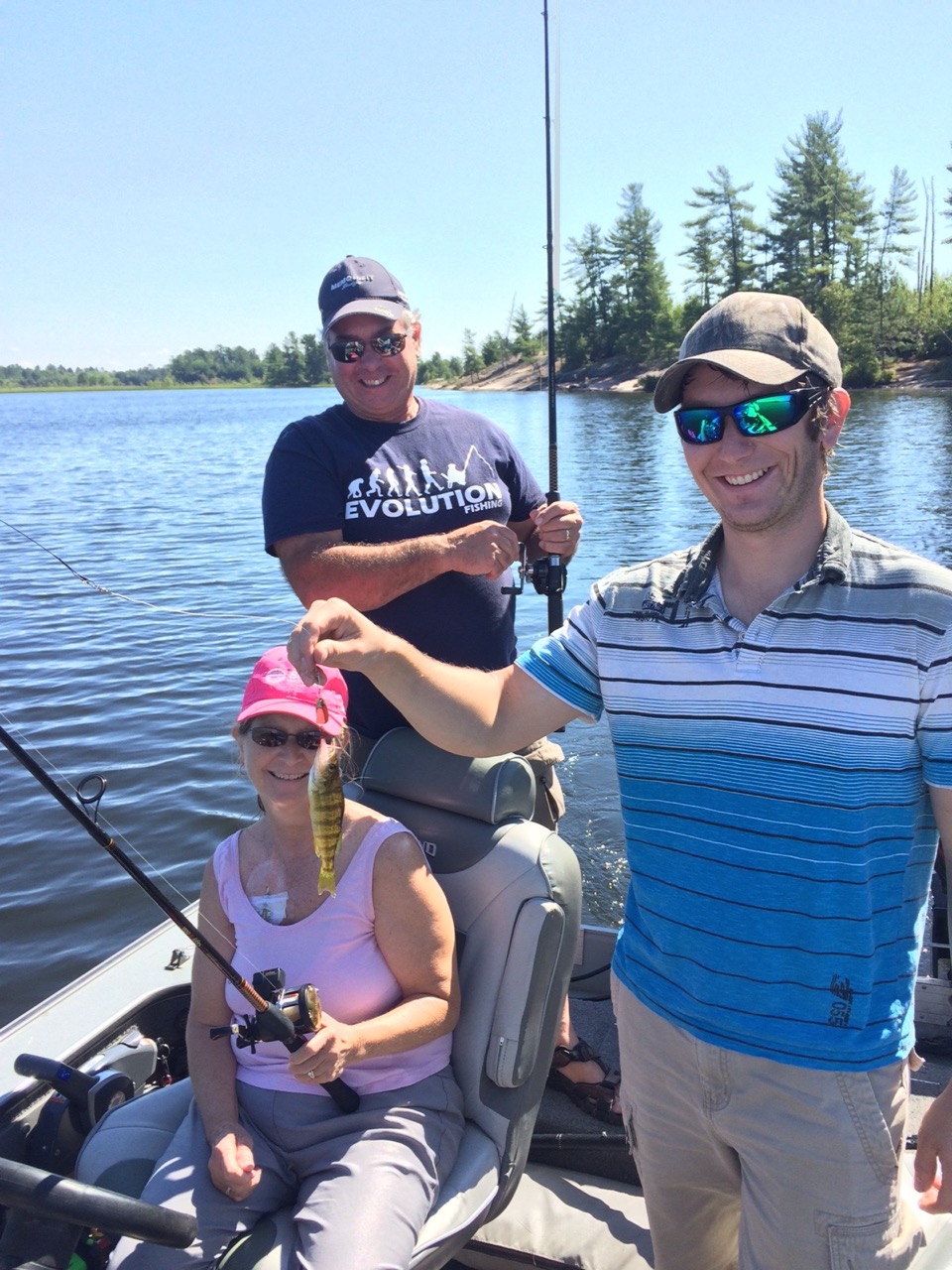 Shelley enjoying an afternoon fish with her husband John and son Curtis. If you look closely at Shelley’s chest, you can see the ‘central line’ which was connected to a main vein and artery to her heart. (Photo courtesy of Curtis Martin) 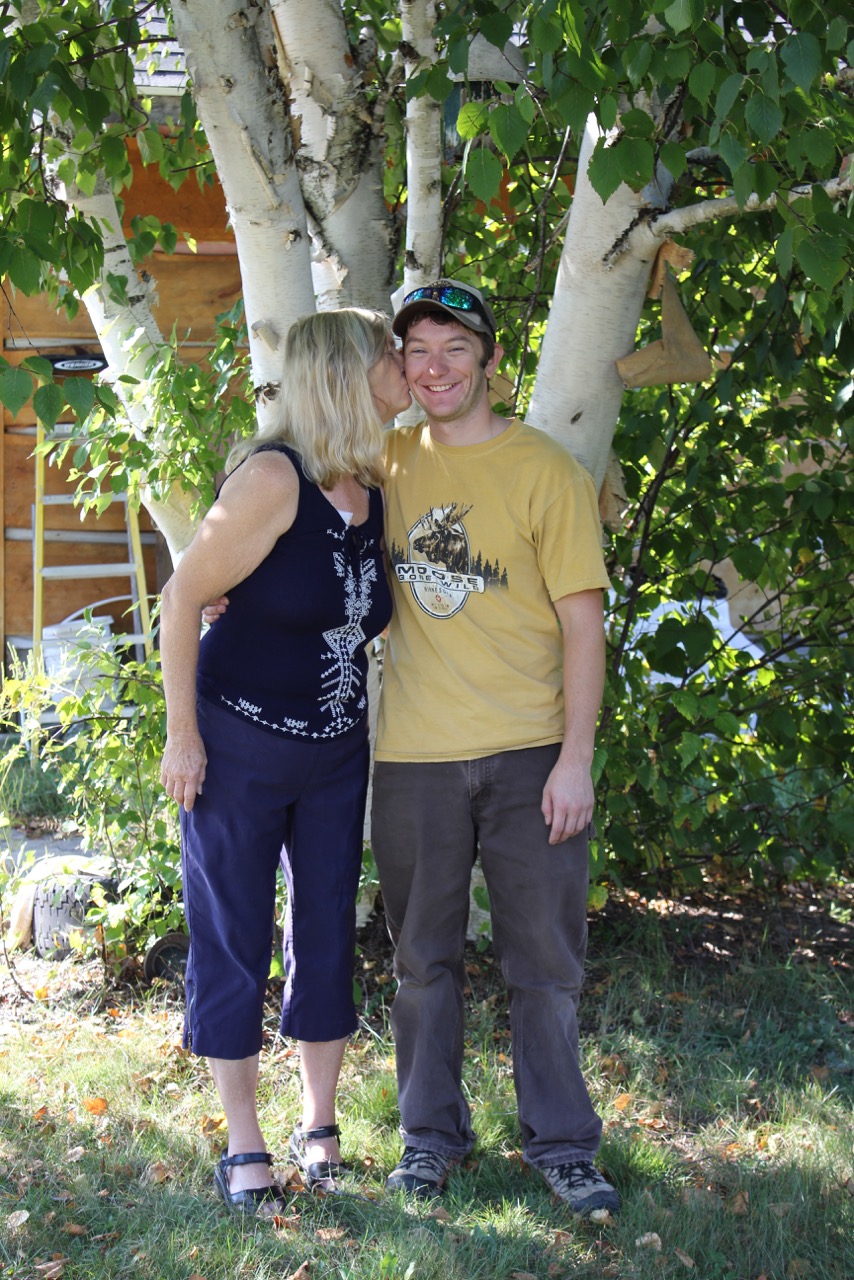 Curtis gets a good luck kiss from his mom the day before the two had surgery for the kidney transplant. (Photo courtesy of Curtis Martin)