You are here: Home / Entertainment / Algonquin Theatre’s Concerts on the Dock series shaping up to be another crowd pleaser

Concerts on the Dock is one of summer’s most anticipated entertainment events. The series – which runs every Wednesday evening in July and August from 7:00 – 8:00 p.m. at the Town Dock Park, weather permitting – brings a variety of primarily local performers to the outdoor venue. It never disappoints and this year’s line-up will be no exception.

On June 20, Algonquin Theatre manager Matt Huddlestone, accompanied by two of this season’s performers – Clayton Earl and members of the Northern Lights Steel Orchestra – unveiled the acts that will entertain young and old this summer.

The series has been running for 10 years, four in its current location which has proven a popular venue with the audience. “You’re within a hands-reach of the musicians,” says Huddlestone. “We have our regulars that come – like the steel drums, pipes and the concert band – and we’re introducing new (artists).” He advises people to arrive early to be sure they can find a seat.

The Northern Lights Steel Orchestra (NLSO) is an audience favourite. More than 30 musicians – all of them volunteers – play a variety of tunes from reggae and classical to Caribbean classic rock on more than forty steelpans. NLSO is a non-profit organization established by Mervyn T. Jordan, who hails from Trinidad and Tobago, in 1998 for the purpose of promoting the steelpan artform. His son Marlon helped him begin the organization. “It’s been in our family for a long time,” he said. “It’s a thrill to see people discover this instrument that’s been around for so long… it’s a unique instrument. People describe it differently – some people hear trumpets, some people hear piano, some people hear other instruments in there. It’s a fusion of sounds that you’ve never heard before yet is very familiar.”

Jordan says the orchestra invites people to come up as close as they want without touching the instruments. “They feed off your vibe and your energy as you’re playing.”

The crowd interaction is one of the things Jennifer Eberhardt loves about Concerts on the Dock. “The response we get from people, it makes it more fun. The more the crowd enjoys themselves, the more we enjoy ourselves.”

Matt Moody said that the park lends itself well to the instruments. “The way the sound travels across the water… acoustically it’s a great venue.” Due to space constraints, only about half of the orchestra appears at Concerts on the Dock, but you wouldn’t know it from the sound.

“The way our music is arranged, it is an orchestra, it’s not just a band,” says Eberhardt. “There are 10 different types of steelpans that play different sounds from high soprano to low bass.”

The Northern Lights Steel Drum Orchestra plays Concerts on the Dock on July 19.

Clayton Earl will be playing Concerts on the Dock for the first time this year to close out the series on August 30. “I have the opportunity to play with a full band and we are going to play all new material.” The songs will appear on Earl’s next album – which he hopes to crowdfund and record on vinyl over the winter for release in the summer of 2018. Concerts on the Dock will be your chance for a sneak peek.

Concerts on the Dock is a free event, but donations – 100 per cent of which go to the performers – are welcome. Limited seating is available on the rocks at the Town Dock park or bring your own lawn chair, come in early by boat and score a slip along the shore, or enjoy the music from a nearby restaurant. Don’t forget to bring a toonie for the band and a friend!

2017 Concerts on the Dock line-up, presented by the Algonquin Theatre 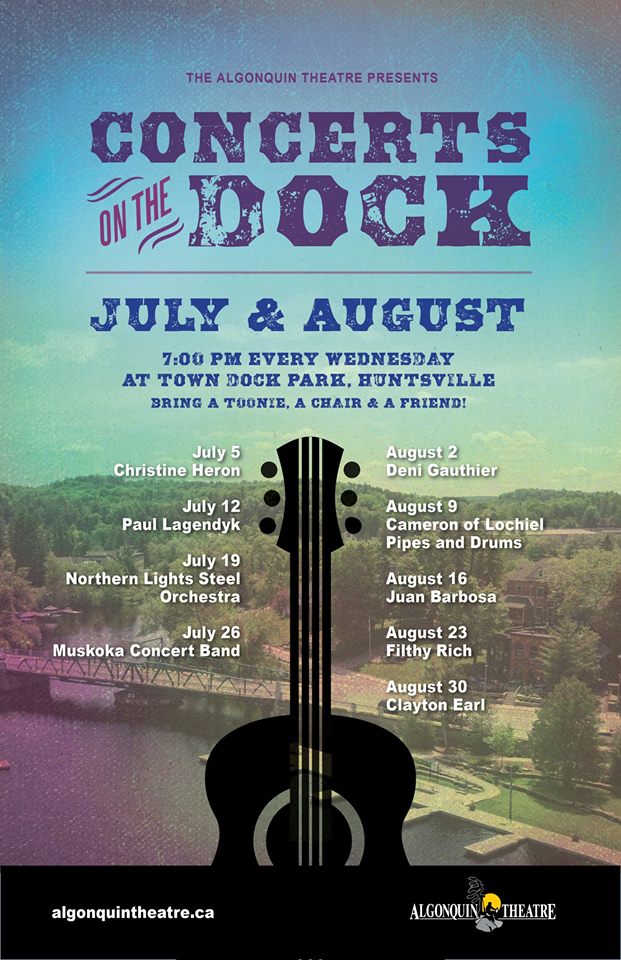