Life wasn’t easy for Muskoka’s early European settlers. Promised easily farmed land and an equally easy life, they arrived to find a scenario quite different from what they’d been led to believe.

Playwright Stina Nyquist captured the hardship they faced in her scripts, and the Huntsville Festival of the Arts (HFA) is bringing some of them to life in a two-play production, Tales of Muskoka: A Celebration of Stina Nyquist, in one of her favourite venues, Muskoka Heritage Place.

“Stina did so much research,” notes Suzanne Riverin, who directs Up the Blasted Trail, an adaptation based on Stina’s script of the same name. “She went back in time to figure out how people were bribed to come here, promised farmland they didn’t have to do anything to, and then people got here and reality set in. It’s not a fairy tale, what happened is true. These people had a really rough go.” Riverin adds that rehearsing in Muskoka Heritage Place and imagining what life would have been like for the people who lived in the historic buildings was “a real eyeopener”.

Stina’s son, Jan Nyquist, allowed Riverin and HFA general manager Rob Saunders access to all of her original scripts. Riverin chose Up the Blasted Trail “because although it showed the hardships, it’s also quite funny and lighthearted.” She has pared down the script to fit the production’s two-show framework, but remained true to Stina’s original words.

Up the Blasted Trail is an ensemble production featuring Karen Thorn, Terry Savory, Frank Berg, Shawn Marks, Lizzie Robinson, and Jane Morris, and is stage managed by Pat Lightfoot. It will be the evening’s second performance, held outside Muskoka Heritage Place’s Hares House.

Director Greg Perras, who presents Once Discovered earlier in the evening, also wanted to remain true to Stina’s original plays but has taken a different approach.

“I saw common themes and stories being told and what I wanted to do is compile the best of,” says Perras. “Instead of telling one story, (Once Discovered) tells several interwoven stories.” 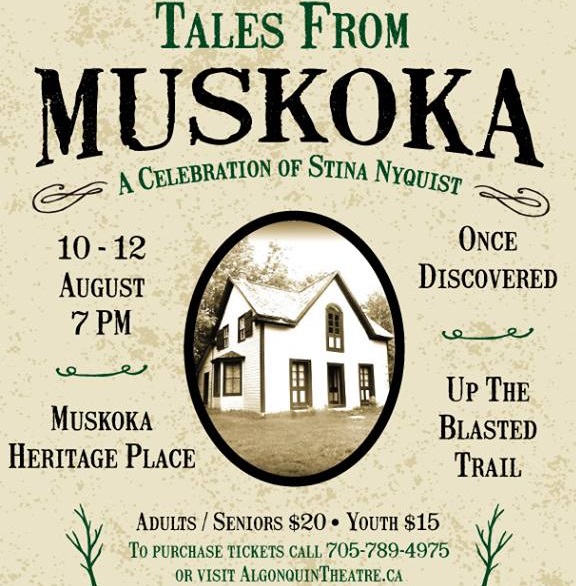 Based on two of Stina’s plays – Ripples From The Bush and Letters From The Bush – Once Discovered features three modern-day women, played by Diane Bickley, Karen Thorn, and Jane Morris, who discover correspondence from their ancestors. It’s set in the pioneer village’s church, which “evokes being in that time period,” says Perras.

“(The evening) will be a really entertaining glimpse of historical life in Huntsville and Muskoka – probably a story most people aren’t aware of –  presented in a way that people haven’t experienced before,” says Perras. “They’re actually in a setting where the stories take place. You’re being catapulted back in time.”

Between the shows will be a 20-minute intermission at Boles Barn where Lizzie and Josie Robinson will perform folk pieces from the era, and lemonade and fresh-baked scones provided by Perras will be served by costumed performers.

Tales From Muskoka runs for three nights only,  August 10-12 at 7:00 p.m., at Muskoka Heritage Place. Limited tickets – $20 for adults and seniors, $15 for youth – are available at the Algonquin Theatre box office or online here.