It started with an old map. He leaned in closer to get a better look and that’s when he saw it.

Then again, it was probably fate that Russ Nicholls came across it anyway.

“I spotted this little railway, and there was a small inscription that said, ‘The world’s shortest commercially operated railway,'” recalls the 90-year-old. He’s told this story many times but it never gets old. “It was located between Pen Lake and Lake of Bays. I told to my wife that I’d like to see that little railway.”

Indeed there have been dozens of significant moments in Russ’s life over the course of the last nine decades. But what makes this story particularly significant is that had Russ not spotted that inscription on that old Esso three-star Imperial Oil road map 60 years ago, his involvement in resurrecting a tiny steam train, which he helped bring to this town, likely would have never even happened. His love for trains runs deep but his love for the Portage Flyer runs even deeper.

It was an adventure I was keen to get into from that moment.

His eyes still sparkle and there’s excitement in his voice when he rehashes a life well lived. The days gone by are precious to him. There’s been a lot of highs along the way, but the lowest point thus far was losing his beloved wife of 65 years eight months ago. She was the apple of his eye and he misses her more than he can put into words. He’s grateful for the support from his family, though. His three daughters are his pride and joy.

Russ recently transcribed all of his memories onto paper so that when he departs from this world nothing will be unknown. Or forgotten. In a way, he’s preserving his knowledge. Passing it on. He’s like a historian for his own personal story.

But he’s also a historian when it comes to that once bustling little railway and that shiny, little Portage Flyer steam train. It moved a lot of people and a lot of freight around Lake of Bays in its heyday, which was from 1904 to 1959. As one of the founding members of the Huntsville and Lake of Bays Railway Society, Russ was a driving force behind the resurrection of The Portage Flyer. But it wasn’t a solo mission by any means. He wants that to be clear. Getting the steam train back on track to where it operates today was truly a labour of love that was carried out by a long list of like-minded individuals who all believed it had something to offer the town. It was an endeavour that took 24 years to come to fruition. However, the rewards of a lot of hard work have certainly paid off since The Portage Flyer fired up its engine once again in the summer of 2000.

The fact is I didn’t do it alone and I couldn’t have done it alone. There were so many people on board. Seeing The Portage Flyer up and running today means a lot. Especially when you see the little kids and parents riding it. It has become a tremendous tourist attraction and revenue generator. The Pioneer Village wouldn’t be anything without The Portage Flyer.

Back in May 2017, he handed over the book’s copyright to the Township of Lake of Bays Heritage Advisory Committee. He never intended on profiting from it. He simply wanted to share an important story. The committee now benefits from proceeds from book sales, and Russ was happy to hand over the rights because they were so good to him over the years.

“Writing that took a long time but it was a labour of love. I wanted to document everything I knew so we could have a history of it.”

In March 2002, Russ was presented with a commemorative medal for the Golden Jubilee of Her Majesty Queen Elizabeth. The medal is awarded to Canadians who have made a significant contribution to their fellow citizens, their community and Canada. Seven years later, he received the Lieutenant Governor’s Ontario Heritage Award for Lifetime Achievement as an appreciation of a lifetime of volunteer work to identify, preserve, protect and promote our province’s rich heritage. 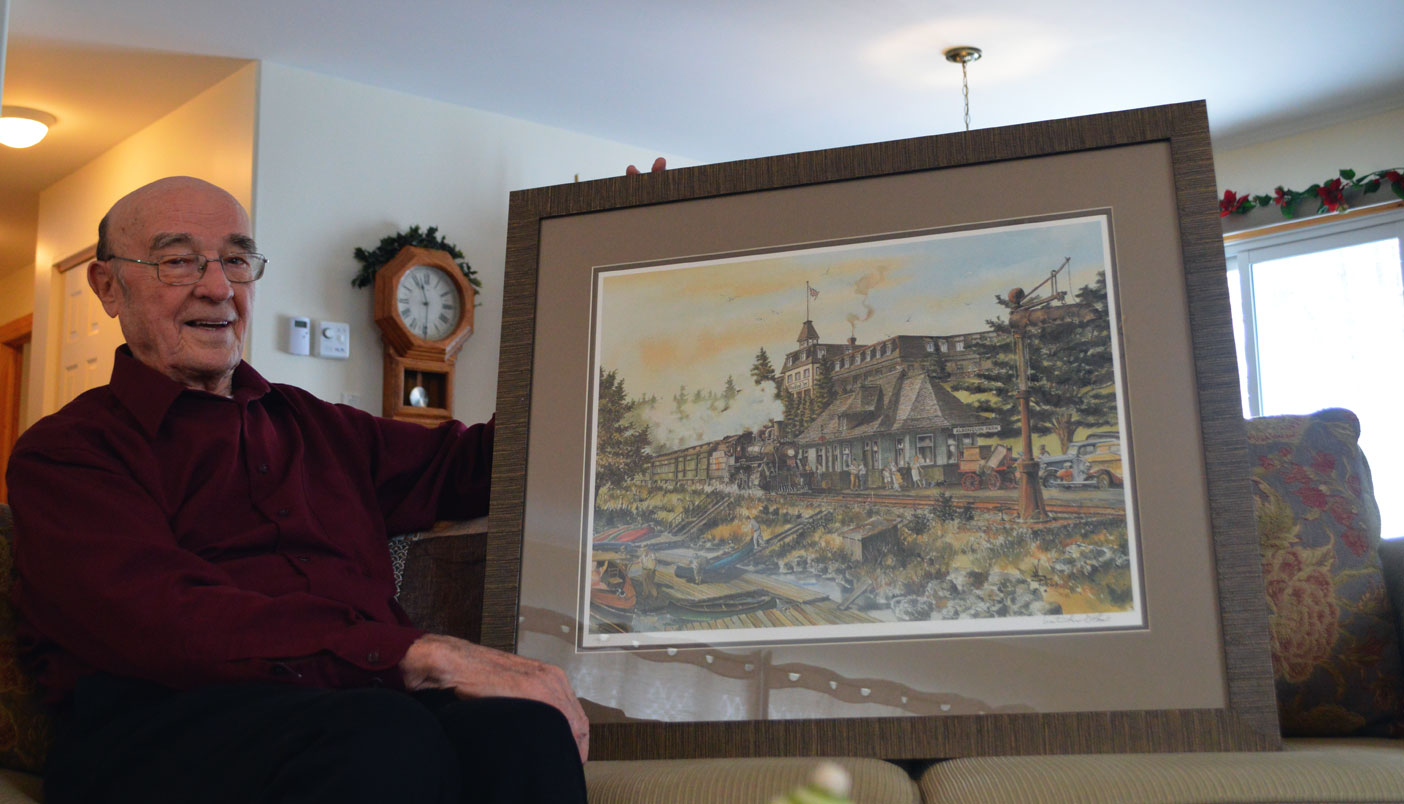 This one-of-a-kind painting is not of the Huntsville Train Station but nonetheless it’s got a special spot in Russ’s heart. 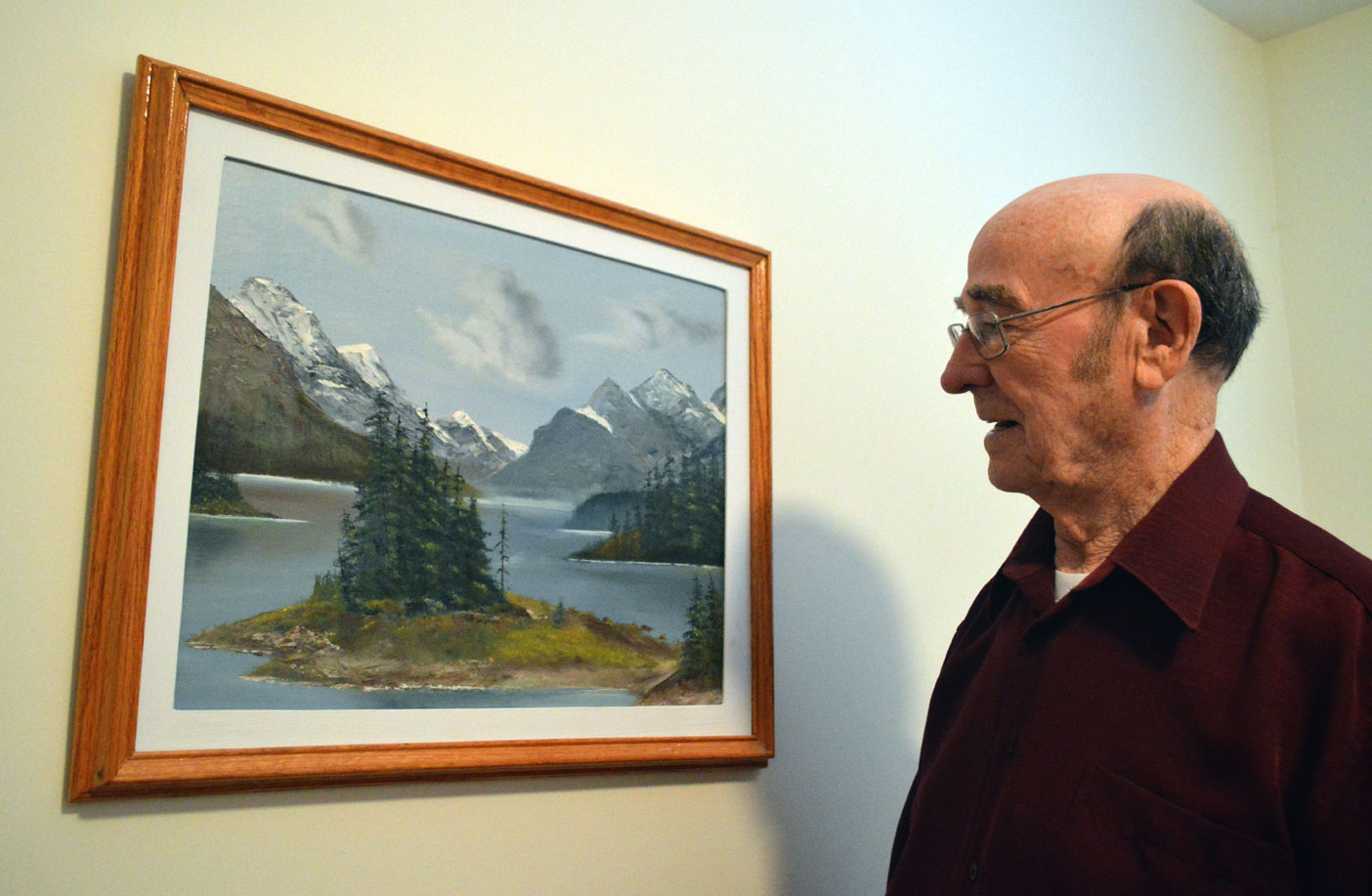 It was back in the early 1950s that Russ first decided to try oil painting. As you can see, it’s a gift that comes from within. He has set up a special area in his home to unleash his inner artist.

Anyone who knows him will say the same thing. He’s the sweetest man – a true gentleman – with an extremely kind heart. He can tear up talking about an instance of when he allowed a little boy to climb up on his lap to be the conductor’s assistant of The Portage Flyer. He will never forget the look of excitement in that child’s eyes. It reminded him of when he was a boy and heard the steam train chugging down the track. Russ also loves to talk about children who got the opportunity to send a telegraph message from the train station. (At one point early in his life, after a tiresome learning curve, Russ could successfully send and receive 15 words a minute).

When asked what’s one of the greatest things he ever did, he responds after a few seconds of pondering.

“I would say it was in 1970 when we moved here. That’s when we started to live the life that I love. Huntsville is everything to me.”

To highlight exactly what this 90-year-old has done in his lifetime (thus far) would make for a great novel. Condensing a life well lived into just over a thousand words was almost impossible because the story really begins long before the pivotal moment of coming across that inscription on the old map. The whole idea of railroads and becoming completely infatuated by them goes back to when Russ was just a small boy. He and his brother used to walk to a one-room schoolhouse in Welland, Ontario. The trek wasn’t just down the road either. It was three miles away. But when they took the train tracks they could shave a whole mile off so that’s just what they did. The highlight of their every day walk to school was seeing the steam train chugging down the tracks. But there’s one particular encounter on a cold winter day that truly made a mark in Russ’s life. Russ and his brother heard the train coming so the stepped off the tracks to let the short train pass. This time, the engine stopped and the fireman came out of the cab to offer them a ride. It was a day Russ will never forget. It sparked something – a forever fire – inside of him. It hasn’t stopped burning.

“From a very young age I wanted to be an engineer, but I think every boy wanted to be one back then. Things were a lot different.”