You are here: Home / Community / The beginnings of winter tourism in Huntsville

In the early 1930s there was discussion in Huntsville’s Town Council to promote tourism in winter, the first community in Ontario to actively do so. It was decided that a winter sports program would be developed.

The flamboyant mayor, J. Frank Kelly, was most enthusiastic. He declared that Huntsville would run ‘Old Man Depression’ out of town. The idea was approved by Parks Commissioner Charles Paget. The Canadian National Railway provided adequate transportation on a special ski train at a special cost of one cent per mile.

Greg Clark, well-known journalist with the Toronto Daily Star, had just returned from the Winter Olympics in Lake Placid and he compared Huntsville favourably to that setting. He was a great promoter of the Huntsville club.

Bruce West, a Huntsville native and journalist for the Globe and Mail, was a great proponent for the ski club as well.

The first honorary president was Robert James Hutcheson, (grandfather of Bob Hutcheson). Bruce Simmons was the first president. One of the officers was Harold Briggs, father of my sister Jane (Briggs) Van Buskirk and me.  He was secretary/treasurer and editor of the weekly newsletter, “The Ski Itch (Let Somebody Catch It Off You)”, which included mostly humorous stories about events that had happened, as well as upcoming ones.

That year, a ski trail named My Mistake began at the top of the Lookout Hill and ran all the way onto Fairy Lake. 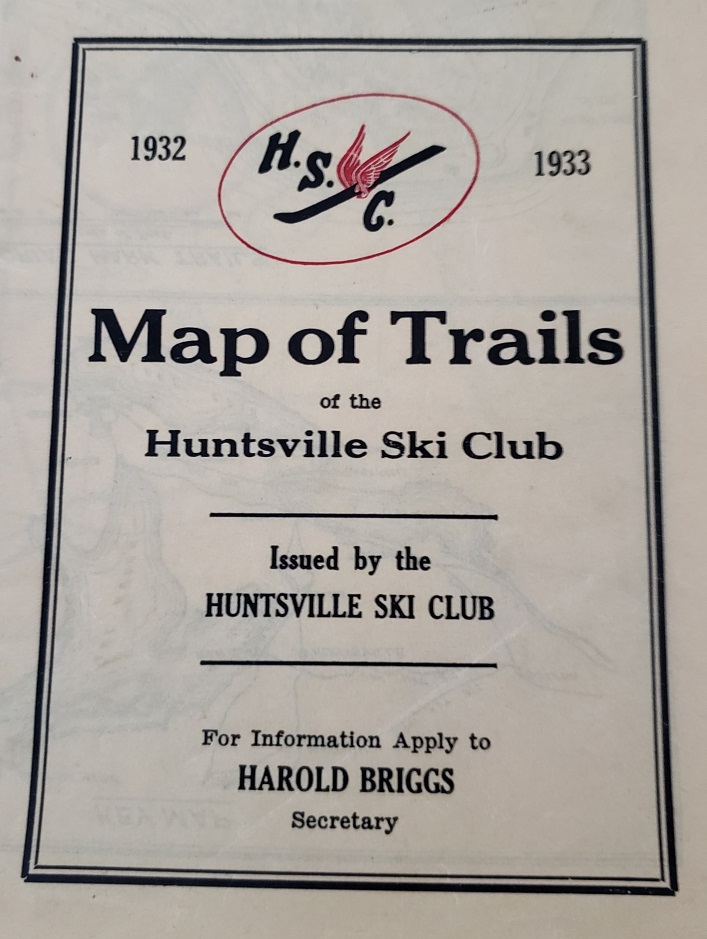 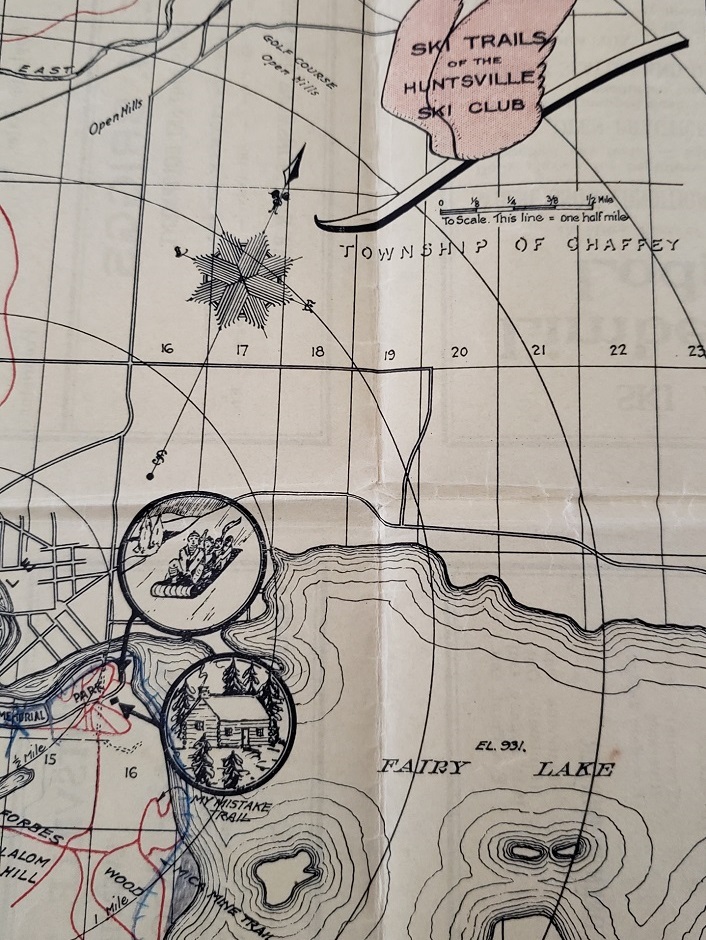 The cover and interior of the 1932-33 Map of Trails of the Huntsville Ski Club. On the right, you can see the My Mistake trail just below the graphic of the log cabin. (supplied)

“Ten cents a foot? Harold, you’ve been taken!” declared old Abe McCann, when our dad told him of his purchase of a large piece of shoreline on Fairy Lake as well as a big chunk of land including the big hill where a mica mine had been situated. (Read more about the mica mine here: The history of Huntsville’s Mica Mine). Our dad bought that property in 1933 from Thomas and Mary Forbes in order to further develop the ski club.

In 1934, a ski jump was built on the Mica Mine hill, claimed to be the longest, largest, steepest jump in Ontario. It had an elevation of 274 feet above Fairy Lake and the jump run was 170 feet. The jumpers could travel up to 70 miles per hour, and could not see the bottom of the hill from the tower.

Imagine the excitement of watching these jumpers fly off the jump, and travelling as far as the lake! Of course, because there were no ski lifts, skis had to be carried up to the top of the hill.

Cross-country skiing and snowshoeing played a huge part in winter activities as well.

The ski club built a small clubhouse at the foot of the hill for spectators to keep warm. Our dad sold and rented skis and snowshoes in the Briggs’ china and jewellery store on Main Street (now Muskoka Jewellery Design). This was great for my sister, Jane, as she could easily acquire new or used skis as she grew. Our dad, if the roads were not plowed, would ski to work from Mica Mine Road.

As a girl, my sister remembered living in a house near the hill. No one else lived there except her parents and her, and her friend, a big St. Bernard dog named Negus. Negus would ride down the hill sometimes on the toboggan and then pull her back up!  What memories she must have had!

It was a four-hour train ride from Toronto to Huntsville. Happy crowds of people were met by our townsfolk and escorted by torch lights along the snow-covered streets to the town hall where the main street was lit up with decorated trees along the way. The whole idea was to have fun and to enjoy a weekend of skiing and camaraderie.

The Carnival of the Snows and Ski Jumping Competitions continued from the mid 1930s through World War ll, despite the rationing of food and gasoline.

There were some excellent local skiers and jumpers. During the war there was also a group of Norwegian airmen training and recovering at the former Limberlost outpost lodge, which they renamed Vesle Skaugum at Interlaaken. These men invariably won the ski jumping competitions, and they taught the local kids a thing or two about skiing! There was one jumper in particular, whose name was Celius Skavaas. He was the champion and all the teenaged girls went absolutely gaga over him!

On a Sunday in January 1942, Crown Prince Olaf and Princess Martha of Norway arrived in Huntsville. Because it was wartime, the Princess was living in Washington with her family, and the Prince spent most of his time in London where his father, King Haakon, headed the Norwegian Government in exile.

Immediately on arrival they were taken to Camp Vesle Skaugum where they visited with and encouraged the Norwegian airmen. After enjoying skiing over the numerous hills in that area, they attended a dinner held in their honour.

They also attended jumping events in Huntsville and were able to partake of Huntsville hospitality.

They left Huntsville the next day, on a special train, sent off by many local residents including Mayor Arthur Hutcheson. According to an excerpt from the Huntsville Forester, “Just as the Princess was about to board the train, little Dianne Kellock, elder daughter of Mr. and Mrs. A. Kellock Jr., stepped forward and presented her with a bouquet of flowers. The Princess graciously received the gift, and stooped and kissed Dianne, who had her younger sister Margaret with her. Margaret was similarly greeted and then the Prince shook hands with both of the little girls.”  (We know the sisters as Dianne Litchfield and Margie Wood today, and no doubt the flowers were from Kellocks’ greenhouse, owned and operated by Andrew Kellock Junior’s brothers Jim, Bill and George. Andrew was the town clerk and treasurer of Huntsville at the time.)

Our family had moved into town by the time I was born in 1945, and so I have very little recollection of the Mica Mine Ski Club. I remember hiking up to the old mica mine, especially as a child and a teenager, with my family and my friends and later with my own husband and sons. Some remnants of the old wooden ski jump are all that remain from more than a decade of joy, fun, laughter and just generally good times generated by this wonderful ski club! It was the start of winter sports which are such a huge part of tourism in Huntsville.

If you’d like to learn more about the Huntsville Ski Club, there is a display of some artifacts and a scrap book at Arrowhead Provincial Park in their new clubhouse.

These writings have been derived from those of Harold (my dad), Jane (my sister), the Huntsville Forester archives, and me.