You are here: Home / Community / Robin’s Rebels riding 200km to raise funds for cancer research in memory of Robin Crawford

Five guys, 200 kilometres, and a passion to help find a cure for cancer: this is Robin’s Rebels.

For the fifth year, a group of local cyclists—this year it’s Bill Coon, David McGuey, John Rea, Dean Smales, and Jim Watson—will be joining thousands of other riders at the annual Enbridge Ride to Conquer Cancer to raise funds for cancer research and treatment at the Princess Margaret Cancer Centre. Their team name is in memory of Robin Crawford who died from pancreatic cancer in October 2015.

Crawford was their coach that first year, an emotional experience, says team captain Dean Smales. She had been fighting hard and the group formed in support of her and her husband, David McGuey.

They continue to ride in her memory, and also for every other family member and friend who has been affected by cancer in some way, says Smales. “It’s a good cause. Pretty much everyone is affected by cancer.”

The ride is a two-day, 200-kilometre journey that begins in Toronto and ends in Niagara Falls.

The team’s training efforts have been thwarted by lingering winter weather that has been followed by a cold, wet spring. “The weather is not cooperating—it’s not exactly fun to go for a ride,” says Smales. “I’d say we’re not prepared but we’re still going to go. We’ll be okay.” He jokes that with both a pharmacist and a doctor on the team, they’ll be in good shape if they get into any trouble.

Robin’s Rebels have raised more than $130,000 to date, and are aiming to raise at least $12,500 this year. They are about 70 per cent of the way there and are hoping the local community will help them reach their goal. You can support Robin’s Rebels with a donation to the Ride to Conquer Cancer here.

The team’s composition has changed from year to year, and its current members are encouraging other local cyclists to join them for the ride in 2020. 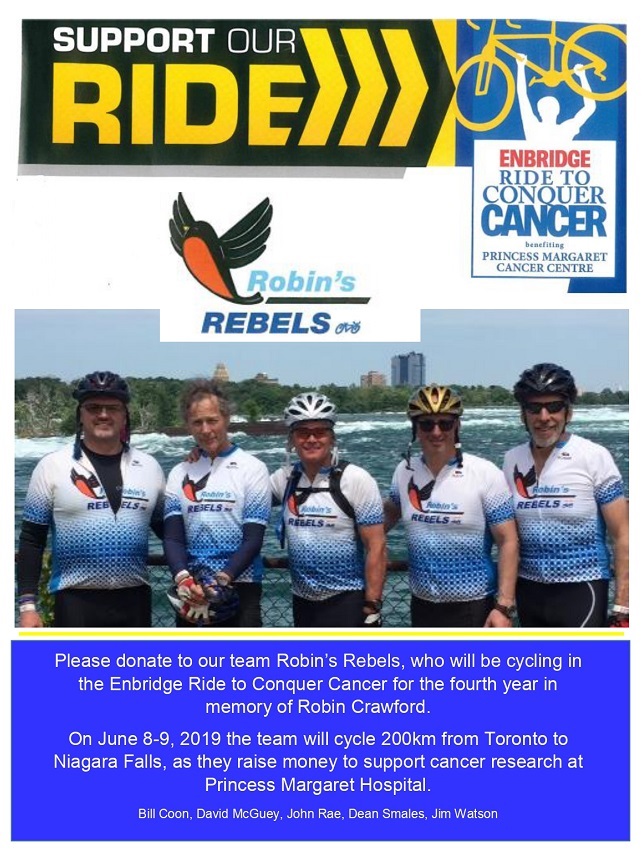