You are here: Home / Community / From humanitarianism to women’s security: Nancy Osborne’s got this

Nancy Osborne has seen some terrible things throughout her military career and during her time with the United Nations as a security specialist. But the experience has not made her a cynic. This is a woman who smiles and laughs easily and often. She is an expert with 40 years of experience in women’s security and she has a gift for finding happiness and hope in the most unexpected of places.

She muses, “Life is so hard for the victims of crisis but I was always able to draw my joy from them.”

“We hired a young man named Angelo to help out at our house in Khartoum when I was sick and we kept him on,” Nancy recalls. “He was always singing and one day I asked why he was so happy. He said that he was celebrating one more day that his baby hadn’t died. Infant mortality is very high in Sudan and few children make it so every extra day with his daughter was a reason for rejoicing.

“We gave Angelo extra money to tuck away in case his baby got sick. But the Sudanese don’t hoard anything so he’d come to work the next day and tell us that his whole village had eaten well that night. Holding on to something for yourself is just not part of their culture.”

Born in Toronto, Nancy was was given up at birth and adopted at three months of age into a family in Toronto. She explains, “At age 12, we moved to Orillia and from there, at 17, I joined the Canadian Forces. From the time that I was one year old my family had a cottage on Buck Lake near Sprucedale and I grew up dreaming of one day living in Muskoka.”

That dream became a reality. Nancy met Jay Osborne in 1991 when his best friend married hers and it wasn’t long before they, too,  married. They bought their home on North Menominee Lake Road in 1995, which they now share with their handsome rescue dog Habibi – Arabic for dear one – or Bibi for short. 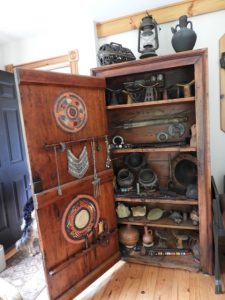 The couple really value their time together, in part because Nancy was away so much throughout their marriage. They love to travel and at the end of each of Nancy’s assignments abroad, Jay joined her and they travelled together for some weeks before returning home.

A large refinished cabinet in their living room displays dozens of beautiful and meaningful things they’ve collected on their travels.

Serving in the Security Branch of the Canadian military, Osborne enlisted as a Private and retired as a Major 21 years later. She was honoured with a CD (the post-nominal letters for the Canadian Forces Decoration) and is recipient of the Commemorative Medal for the 125th Anniversary of Canadian Confederation in recognition of a significant contribution to Canada as well as a Commander’s Commendation “… praiseworthy initiative and motivation.. . brought honour to herself, her military profession and to CFRETS (Canadian Forces Recruitment, Education and Training System).”

Following retirement, Nancy was recruited in 2002 by the United Nations as one of the first women ever deployed as a security risk adviser in the support of UN humanitarian operations in high threat environments.

She recounts, “I remember shaking hands with a Janjaweed commander early on in the Darfur crisis. The name means ‘devil on horseback’ to the local population. They were a militia force linked to the government and accused of many of the atrocities in the Darfurs. After negotiating with him for safe passage for aid workers I’d think of retired Lieutenant-General Roméo Dallaire’s book Shake Hands with the Devil and think that was exactly what I was doing.”

She served in many countries including Sudan, Lebanon, East Timor and India.

In 2010, Nancy was appointed as a security manager at UNICEF Headquarters in New York. From there she managed global emergencies affecting UNICEF staff and provided extended surge support in places like Afghanistan, Pakistan, Haiti and South Sudan.

“As one of the first women in many tactical areas of both the military and the UN, I clearly recognized the challenges facing women and it was a natural transition to mentor and train others who followed.”

She explains, “As a trainer and on behalf of UNICEF, I participated in the development of a UN security training package for women. While rolling out the original package I soon learned from the participants that what was truly needed and desired was a more holistic approach to women’s security challenges including the emotional and psychological aspects that impact on our security every day.” She laughs, “So I threw it out and started over.”

When Nancy retired she thought that it would be a shame not to use all of that training so she launched a not-for-profit called I Got This as a platform for workshops called Unlocking Your Instincts for women.

The intent is to help women reconnect with their natural instincts that allow them to quickly identify potential threats in everyday life. Profits from local workshops are given to YWCA Muskoka and used to ensure accessibility to the program for women who might not otherwise be in a position to attend.

It is far more encompassing than a self-defense course, although that is part of it. In South Sudan, one module might have been on how to survive a hostage taking; here in Muskoka, the focus is on situational awareness, predator identification and managing verbal and physical confrontations. Unlike other programs, Unlocking Your Instincts isn’t about what not to do, it’s about saying, “I Got This.”

Coming from a conservative home and then going into an organization as bound by rules as the military, Osborne really had to step out of her comfort zone when confronted with the incredible challenges in conflict/crisis zones. She says, “It helped me to learn to look at things from someone else’s viewpoint.”

In the West, we judge the poor in third world countries for having “too many” children. But many children die and families will need to have someone to care for them in their old age so having one child or two is considered short sighted.

It is easy to think that how we do things in the West is the right way and perhaps the only way. Osborne recalls having coffee after teaching a class in India. “The women would giggle and ask, ‘Are you married?’ When I answered in the affirmative they would query in a kind but slightly mocking tone, ‘Is it a ‘love’ marriage?’ She pauses, “It really made me think about it. In India many think of a love marriage as a lesser union that is doomed to divorce.”

Osborne laughingly deflects any suggestion that she is a hero or even a humanitarian. “I see this life I’ve had as incredibly selfish. People may see this as charitable work but it feeds my soul.” She laughs again. “I guess it’s all about me!” In a more thoughtful mode she concludes, “I truly have been given so much more than I’ve received.” 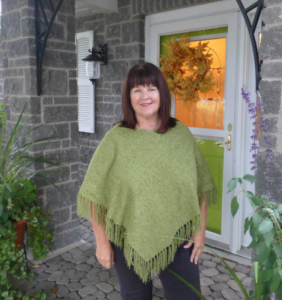