In this week’s photo, Mary Valina “Daisy” Wardell (1873-1972) and Claude Matthew Wardell (1883-1976) take a stroll down Main Street. The siblings were the children of Matthew Wardell and Grace Smale. Matthew founded Waardell & Company, a dry goods store at 77 Main Street East. It burned to the ground December 28, 1911 and was relocated across the street at 86 Main Street East. The white building on the left side of the photograph is the Wardell store at 77 Main Street East (where Spectacles Vision Centre is today), before the fire. The two storey brick building on the right is Hanna and Hutcheson Bros. (the present location of Algonquin Outfitters).
In 1908 a sewer line was installed down Main Street and work began to install granolithic sidewalks, a mixture of cement and granite chips, which might date this picture between 1908 and 1911. (Photo and details courtesy of Muskoka Digital Archive) 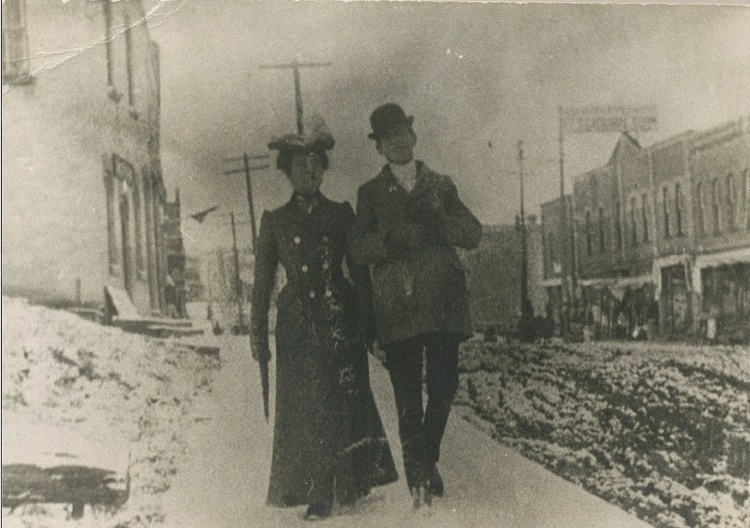 In 1914, Huntsville’s first car dealer, J.E. Mosley, ordered 20 new cars to sell. At the beginning of that year, you could buy a Ford for $650, a price that dropped to $599 by the end of the year, and dropped further still in 1915, “bringing car ownership within reach of many people in Muskoka,” according to Huntsville: With Spirit and Resolve by Susan Pryke. In his ads, Mosley said, “there are only two kinds of cars – the Fords and can’t affords.” Mosley owned the hardware store at the corner of Main Street and Brunel Road (pictured here) and ran a garage across the street. (Photo courtesy of Muskoka Heritage Place) 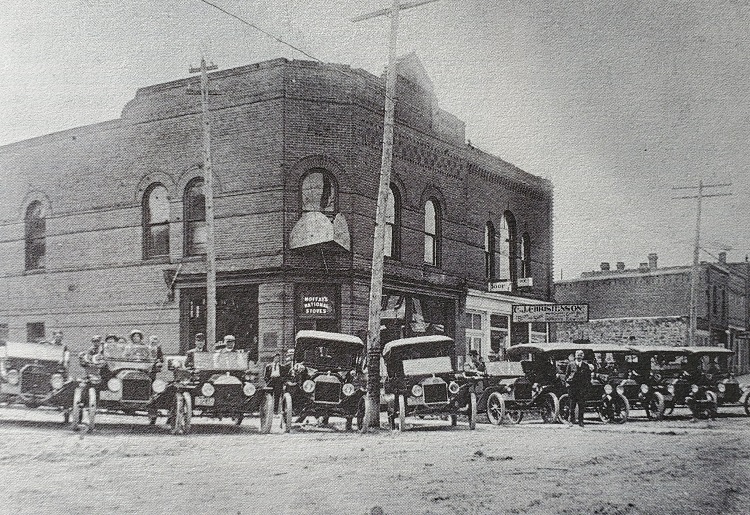