You are here: Home / Community / Huntsville Public School in the 1950s: One student’s perspective

Main photo: Mrs. Bice’s kindergarten class at Huntsville Public School, 1950. Martha Briggs Watson is in the back row, second from right. Her friend, Susan Kellock, is next to her at the end of the row. (supplied)

It was the morning of September 5, 1950. There were about ten houses on Fairy Avenue where I lived. Some of them were built of bricks from our local Huntsville brickworks, in the late 1800s. Skipping along the street, holding our mothers’ hands, were two five-year-olds, so excited for the first day of kindergarten. Those five-year-olds were my best friend, Susan Kellock, a mere six days younger than I, living right across the street…and me.

It seemed a very long walk—although everything along the way was familiar to us—over the bridge, and along Main Street to Huntsville Public School, a BIG three storey brick building very close to the northwest corner of Centre Street and Caroline Street. 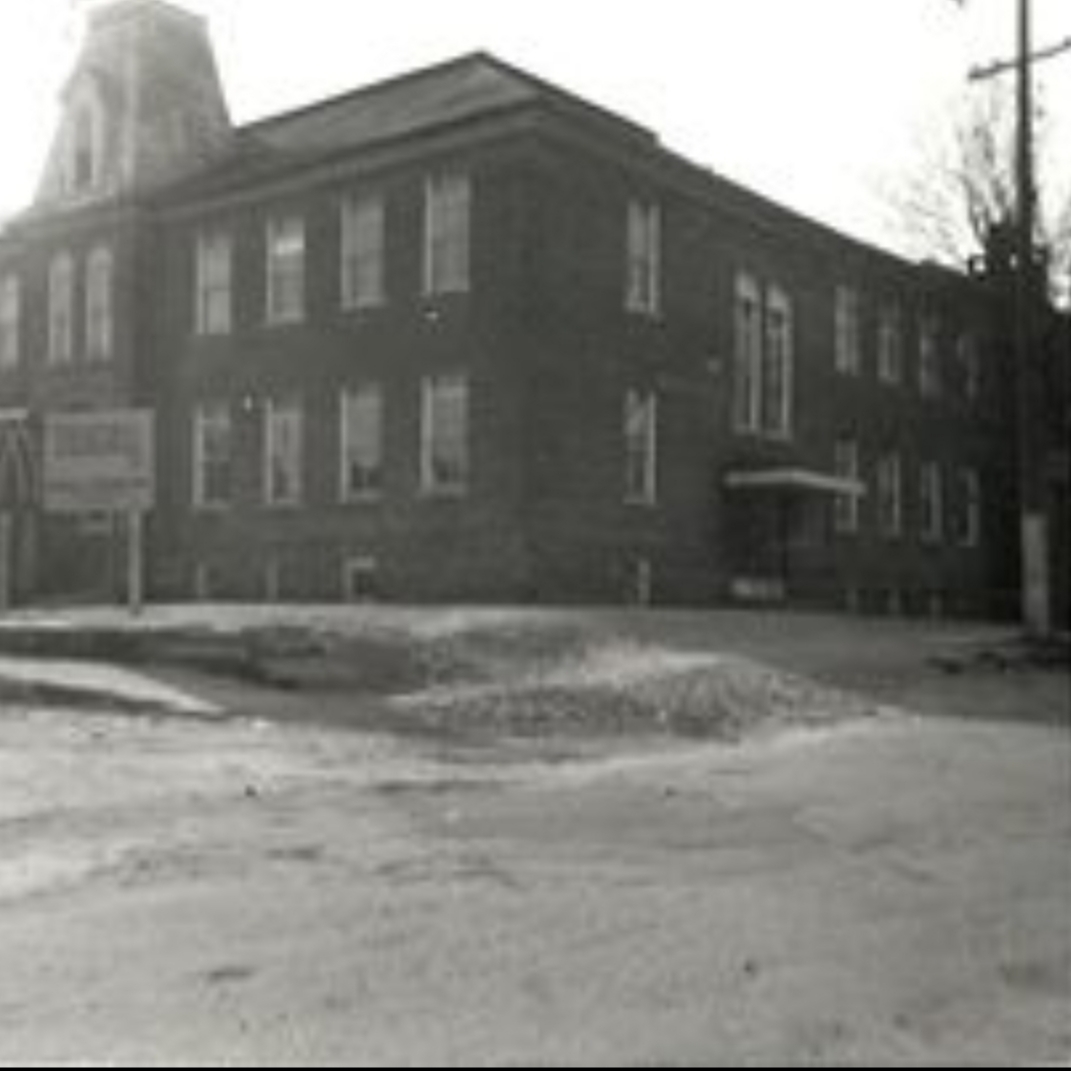 There we met our lovely, kind and gentle teacher, Mrs. Bice, just the right kind of teacher for a child’s first year. Our mothers left us there, happy, and we wouldn’t see them until noon, when the whistle blew at the Anglo Canadian Leather Company tannery, just north of our school, to signal lunchtime, when they came to walk us home. Kindergarten children attended just half a day back then.

After that first day, an older girl who lived on our street made sure we got to and from school. But very soon, we were on our own, always together to make the trek ourselves.

In Grade One, we were placed in one of two classes in a two-storey building that we called the White School. It was situated where Huntsville Public School now stands. (I believe it had been the building where the Anglo Canadian Leather Band held their practices, and later housed Huntsville’s first museum.)

A highlight for both Susan and me that year was being taught music by a teacher who came to our school to teach us. We were excited to have the privilege of singing a duet in Huntsville’s Music Festival, held at Huntsville High School. That first year was the beginning of our music education every year after that.

From Grade One on, we attended school for a full day. The school day began at 9 a.m. with each class singing our national anthem, “God Save the King” (and later “God Save the Queen”, starting in February of 1952). At noon, we all went home for lunch. Almost every mother worked at home in those years. The school bell summoned us back from 1:30 until 4:00. There was one 15-minute recess in the morning, and one in the afternoon as well.

From Grade Two on we were back in the big brick school. Our main subjects were Reading, Writing and Arithmetic! Susan and I were placed in the Accelerated Class, whereby grades three, four and five were completed in just two years. Our teacher was the most wonderful teacher ever, Miss Parker. She loved us, we loved her; she loved teaching, and we loved learning. Those two years were magical for us. Anyone who was taught by Miss Parker—and there were hundreds of us—was very fortunate indeed!

By a very young age, we were fairly streetwise. Our circle of friends had expanded from those on our side of the bridge to those on the west side. Our favourite stop on our way to or from school was Trickey’s, a candy store at 7 Main Street. Three blackballs could be had for a penny, and Double Bubble Gum was a mere two cents, and that included a joke on a folded paper inside the tiny pack. More expensive was Cracker Jack—maybe five cents, including quite a substantial prize! There was all manner of candy—jelly beans, jujubes, black licorice cigars, to name a few, as well as many flavours of chewing gum.

By Grades Six and Seven, we had become quite sophisticated. All the girls in the whole school were required to wear dresses, or skirts or tunics and blouses. The boys were not allowed to wear jeans. The words “Girls” and “Boys” were carved atop the cement frames around the outside doors. We entered and exited by those doors according to our gender, always in single file, and always walking along the right side of the hallways.

In Grade Eight, we got to have “Rotary”, whereby we got to go to different classrooms for different subjects: Math, Science, and English. We even went to the dingy basement of the school for Physical Education once in a while, and to another room in the basement where we had music classes and learned to play the recorder.

It was in Grade Eight that I was spanked by my teacher, over his knee, in front of the whole class! I clearly deserved punishment but that was quite extreme. Imagine a teacher doing that today! It was just the boys who were dealt the strap as punishment, to their hands, and often within hearing range of the rest of the class.

Also in Grade Eight, one afternoon a week, we walked to Huntsville High School. The girls were taught Home Economics, and the boys were taught Woodworking/Shop. Some of us felt it very unfair, and made an appointment with the principal to lobby to take what the boys were taking. We felt it was much more exciting and useful. Of course, we were promptly escorted out of the principal’s office and back to Home Ec. That was my first experience with protesting!

Every recess involved exercise. In the fall, many girls would bounce special, soft-rubber, red, white and blue-striped balls against the school walls, reciting special poems or songs or just lyrics to go with the bounces. In the winter, it would be making snowmen (that’s what we politically incorrectly called them then) or snow forts. All the girls wore leggings under our skirts, and of course coats, boots, mitts and hats. In the spring it was skipping, single ropes, longer ropes held by two people while the others in turn jumped in, and double dutch. There was always a good old game of tag going on as well. I have no idea, besides teasing us girls, what the boys did at recess. There was no such thing as “indoor recess”. We just had to dress according to the weather and tough it out.

Each year, as a school, led by our principal, Mr. Laycock, we marched in the Fall Fair parade on the Friday afternoon of the opening day, from school, down Main Street, and along Brunel to the fairgrounds which were beside the arena and near the high school, in a huge field. There were many entries of vegetables, baking, preserves, flowers, sewing, knitting and even farm animals, as well as a few rides, such as a merry-go-round and even a small ferris wheel. Kids could also enter art work, and various other creations, all to be judged and to be lucky enough to win a prize!

Our field trips were only two. In Grade Seven, we walked one block to Parker’s Bakery, on Main Street (where the CIBC is now) for a tour to witness the creation of their most delicious baked goods. In Grade Eight, it was one block the other way, to the Anglo Canadian Leather Company tannery. The tanning process, although incredibly interesting, and very gruesome, didn’t afford the lovely aromas of Parker’s.

Every winter, our custodian built and maintained a skating rink in the school yard. Many a day we stayed after school to skate, leaving for home only when darkness began to set in. It was just so wonderful.

At the end of June, on the last day of Grade Eight, on our way out the classroom door, we were handed our report cards and certificates promoting us to Grade Nine. That was graduation, and so ended elementary school for us. That day, Susan and I walked home together, just as we had done almost every day from kindergarten forward.

These are but some of a myriad of memories that are flooding back to me. We all have our own. The ones in earlier years, as well as later years, are bound to be very much different from mine!