You are here: Home / Events / Niveous: A winter art show 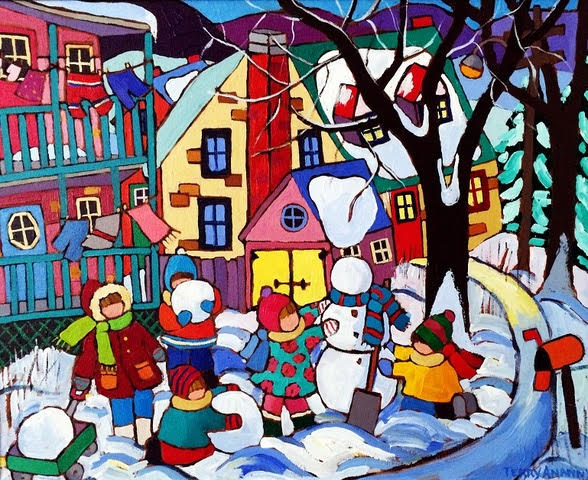 Introducing Terry Ananny. Terry’s bright and colourful acrylic paintings of hockey, children at play and seasonal village scenes cheerfully capture the spirit of Canadian life. Her early years spent in summers on Lake Muskoka and traveling to Quebec enriched the artist with lasting impressions of the beautiful Canadian landscape and diverse Canadian culture. Her works are held in many Canadian and international corporate collections. Canadian Prime Ministers, Governor Generals and the Government of Canada have collected her work over the past two decades. Her work has been reproduced on UNICEF, Make-A-Wish, Children’s Wish, Save the Children cards.

Alongside Terry’s work we have a series of winter scenes by Dorset artist Elizabeth Johnson and Chris Keene. Elizabeth depicts Dorset and surroundings in her oil paintings sometimes using a palette knife.

Chris Keene has a realistic style of painting. He starts off with a composition done on his computer ( He is a retired Walt Disney artist!), he then uses this composition to paint his acrylic paintings on canvas. He loves to explore the interaction of us humans with our wildlife. His work is beautiful and interesting as it tells a story.

Toronto artist John Kinsella, is one of our artists who displays his work throughout the year. His interpretations of Algonquin Park and surroundings are created in oils. He often drives up to the Park to spent time sketching, after he creates his paintings in his studio. John’s work has become well-loved and we are so pleased to be able to display his beautiful art.

Last but not least is Kathy Haycock. Kathy resides most of the year in Eganville. She lives and breathes Algonquin Park, often painting en Plein air. Kathy’s work is greatly influenced by her dad, painter Maurice Haycock who was A.Y. Jackson’s painting partner for over 30 years.

Eclipse Gallery staff daily at 9.30 am- 12 pm or by appointment