You are here: Home / Elizabeth O’Connor of RBC on the merits of being a calm, slow and steady investor

When Investing in Equities, Think Like ‘the Cheerful Billionaire’

People invest in equities in anticipation of financial growth through capital gains and dividends. I am sure the mere mention of the phrase ‘the market’ conjures up images of gambling, crashes and losses to many novice investors. The greatest paradox of the market is that “slow and steady” usually wins the race rather than short-term trading. The calmer the investor, the better he or she does; and the less time one spends worrying about the market, the wiser his or her decisions.

In the eight months between mid-May 2015 and mid-January 2016, the Toronto Stock Exchange dropped over 24 per cent, shaving some 3,700 points from the index. I happened to be on holiday during the weeks it hit its lowest point. On my return, two of my clients let me know the sky had fallen in—one was convinced I had timed my holiday purposely, and the other was sure my holiday was the cause of the market drop! In the four months since, we have regained close to 18 per cent. All factors seem to indicate that we are in for continuing good markets.

Another example of the paradox of the market came up while I was writing this article. If you had $500,000 in the market Monday, May 9, by day’s end you would have lost $5,000 of it. By Tuesday’s close, you had your $5,000 back, plus a profit of over $2,800. If you were constantly watching the market, Monday was an extremely depressing day for you, but Tuesday was over-the-top euphoric. What a crazy way to live.

Considered one of the wisest investors of all time, Warren Buffett may also be the calmest investor of all time. The ‘cheerful billionaire’ is deliberate, modest, kind, humorous and self-effacing—in short, the polar opposite of one’s vision of the white-knuckled investor. An article I read on him years ago indicated his strategies were more company-oriented than market-oriented. One example of his belief in calm, company-thinking was illustrated in the early 1960’s when the American Express Company found itself embroiled in a scandal entirely not of its own making. Rather than shirk responsibility, the company took the high road, costing itself hundreds of millions of dollars and seeing its stock drop by over 50 per cent. While everyone else was dumping the stock, Mr. Buffett was buying, in large part because he recognized the value of the company and admired the honourable way the top brass at Amex chose to handle the crisis.

There is value in being company-focused. Let’s suppose you are invested in companies that consistently pay dividends based on profits and these dividends increase year after year. In year one, your return (the dividend) is 3 per cent, year two 4 per cent, then 5 per cent. What you know is your companies are doing great, profits are increasing every year and your portfolio is growing. Now, even if, during that same period, the market has seen zero growth, your original investment is up over 11 per cent and, once the market starts climbing, the dividend-paying growth companies will see the earliest and largest gains.

The lesson from all of this? Don’t worry, be happy.

This article is supplied by Elizabeth O’Connor, an Investment Advisor with RBC Dominion Securities Inc. (Member–Canadian Investor Protection Fund). This article is for information purposes only. Please consult with a professional advisor before taking any action based on information in this article. 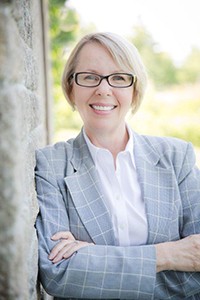 Whether you are looking for a full time, full service financial advisor or seeking expert financial advice as a second opinion, call Elizabeth. With offices in Haliburton, Huntsville and Bracebridge, Elizabeth works closely with clients in cottage country from the lakes and surrounding towns.

Elizabeth O’Connor is an Investment Advisor with RBC Dominion Securities, which is a member of the Canadian Investor Protection Fund. 705-789-2100