The atmosphere was a joyous one, with champagne flowing, music playing, and people soaking up the summer sun. The occasion: the grand opening of Deerhurst Resort’s new Lakeside Lodge, a beautifully appointed 150-unit building perched above Peninsula Lake.

“I can’t begin to tell you how proud I am to be part of this community, to be part of the team here at Deerhurst,” said Jesse Hamilton, General Manager of Deerhurst Resort. “We have been opening our doors and sharing the beauty of Muskoka since 1896…we’re not just looking to the future and thinking about what we’ll become and how we’ll grow but it gives us an opportunity to reflect on our past and look at how it is that we got here. Lakeside Lodge opening up today is as much about the Waterhouse vision for what Deerhurst would become, it has a lot to do with the ideas and the hopes that other owners have had, and it certainly is the first major milestone in Skyline’s plans for Deerhurst Resort.”

Local dignitaries, MP Tony Clement, MPP Norm Miller and Mayor Scott Aitchison offered their congratulations to the team at Deerhurst and Skyline on the new development.

“You can imagine with a project this size, things inevitably change from what you had planned originally so I’m really proud of the partnership that I think we’ve created between the Town of Huntsville and Skyline and that we continue to have,” said Mayor Aitchison. “Jesse [Hamilton] has been a great partner in all the work that we’re doing to try to make Huntsville a more vibrant and thriving community all the time…We’re very excited for Deerhurst, very excited for the next things to come and we are eager to help Deerhurst keep growing and expanding and making Huntsville that much more vibrant. Congratulations.”

Members of the Waterhouse family—siblings and great-grandchildren of Charles Waterhouse, Bob and Sally Waterhouse, and Bob’s sons Brandon and Ryan—were present for the ribbon-cutting.

“We had the privilege of growing up here at Deerhurst in the summers which at that time was a nine-week resort, our grandparents opened up May 2-4,” said Bob. “If you were a guest on Thanksgiving, my grandfather Maurice used to say you’d have to help bring in the boats, and they would turn them over on the veranda and that was it for the season. And then they’d come back in the spring and my grandfather Maurice would put a bowling ball on the east end of the veranda and depending on which way it rolled he would jack it up to make sure it was level for the season.”

He thanked Skyline for “allowing the legacy of Deerhurst to endure.”

In a conversation with Doppler, Hamilton said that Deerhurst Resort is ramping up for a busy season, with July and August looking comparable to last summer, “which was a banner year for the resort and for Muskoka.”

Lakeside Lodge has 150 rooms, 90 of which will be in the resort’s rental program this year. By next summer, Hamilton expects that number to rise to 100 or 110. “A lot of owners are taking their first summer to themselves and planning on moving on to the rental program next year.” 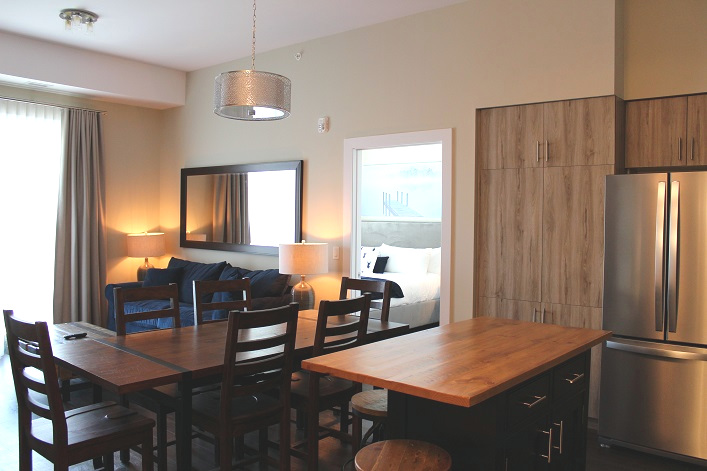 “It’s going to do a lot for the resort overall. It’s giving [our guests]waterfront experiences that we hadn’t really had before, certainly not of this calibre. It’s going to allow us to bring larger groups, association-style business, with more attendees. We’ve always had the meeting space for them but now we are going to be able to entertain group sizes of up to 700 people,” Hamilton added.

Kelly Haywood, Executive Director of the Huntsville Lake of Bays Chamber of Commerce, agreed that Lakeside Lodge will be a good thing for Huntsville. “I think it’s really exciting to have such an incredible monument on Peninsula Lake. It’s so classy and beautiful, and obviously the additional brand-new rooms in our inventory is going to be a huge benefit to any large events that we are bringing to Huntsville. Deerhurst is the largest accommodation option in Muskoka and this just expands our opportunity even more so. From an economic impact perspective, that’s going to be the most positive thing we see—being able to bring additional events and larger events is what’s going to benefit us the most. It’s beautiful and everyone should come and see it.”

About the Lakeside Lodge

Deerhurst’s new Lakeside Lodge is on the site of Deerhurst Resort’s original lodge, which was built in 1896 by Charles Waterhouse. The Waterhouse family owned and operated Deerhurst for three generations.

The 150,000 square-foot building was designed by architect Robert Wengle and was constructed at a cost of $60 million. Interior Design was provided by Marlene Card; Landscape Design was by Mark Pettes.

The design goal for the Lakeside Lodge was to create a modern take on the era of Muskoka’s grand hotels. In the early days of Muskoka’s tourism industry, hotels like the Royal Muskoka, Beaumaris and Bigwin Inn could be seen for miles, sitting atop the shoreline with almost palatial grandeur. By contrast, Deerhurst was originally relatively modest in size and was described as a ‘fine English tourist house.’ Today, Deerhurst has grown into one of Ontario’s largest vacation and conference resort destinations that now, with the Lakeside Lodge, has a lake-facing presence befitting its magnitude in the province’s tourism sector.
Deerhurst Resort

Each of the units, in either a one, two, or three-bedroom layout, has a clean, modern design with a warm, natural feel inspired by the Muskoka landscape. The units are individually owned, with 90 already enrolled in Deerhurst’s guest room rental pool. 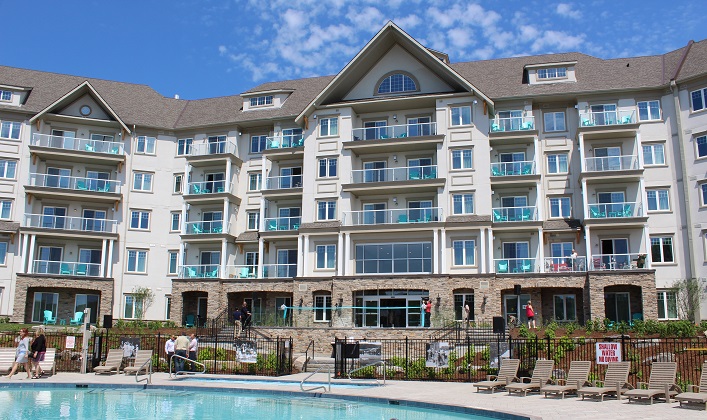 Deerhurst looks much different now than it did in 1896, though some things have remained true its early origins more than a century later. Here are some fun facts and anecdotes, courtesy of Deerhurst Resort:

“According to family lore, the total number of guests in Deerhurst’s first year of operation was a couple from Rochester, whom Charles Waterhouse welcomed in late August 1896. Given that the weekly rate was just $3.50 per person, per week, and included three meals a day, Deerhurst’s annual revenue in its first year was just $7. In just a few years though, business was booming and tents were even put up by guests when all the rooms were taken. In an early form of today’s resort home ownership model, there was a tradition of guests who financed their own cottages at Deerhurst, which were then rented as guest accommodations when the owners weren’t in residence. That tradition continues today, where cottage country retreats are enjoyed by homeowners and resort guests alike at Deerhurst.”

In 1896, guests arrived via train to Huntsville and then by steamboat to the resort. Today, guests can arrive by highway, and can even travel most of the way via plane with new Porter Airlines service to the Muskoka Airport.

The opening of the new $60 million Lakeside Lodge in July 2019 is nothing short of the rebirth of Deerhurst Resort’s waterfront experience, which has been hallmark of Peninsula Lake in Muskoka for more than a century. With the completion of this two year build, this venerable resort’s idyllic lakeside setting has not only been restored, it is transformed into a commanding new landmark.
Deerhurst Resort