You are here: Home / Commentary / According to NRA theory, the USA should be the safest country in the world ~ Hugh Holland

Many are seeking answers in the wake of ever-more mass shootings in the USA and increasing gun violence in Toronto. Many factors are postulated. Every country has some guns, some poverty, some mental illness, the Internet, social media, video games and violent movies. So, none of that can explain why the rate of gun deaths in the USA is to ten times higher than any other developed country. Data does suggests a strong correlation between gun deaths and three causal factors; Inequality, availability of guns, and the strength and enforcement of gun laws. Gun deaths include homicides and suicides.

Inequality
Inequality is expressed as the ratio of the richest ten per cent to the poorest ten per cent in a country. Flagrant racial and economic inequality is often a root cause of resentment, frustration, despair, violence, suicide, and people joining a gang or cult as a place to “fit in”, where they become radicalized. Gun violence is high in some extremely poor countries, but the data suggests that it has more to do with inequality than wealth. The US is unique in its very high rate of suicide within the gun death numbers.

Strength and enforcement of gun laws
Except for the USA, all high-income developed countries have some laws that require civilians attain a permit for possession of most guns, and that restrict open carry, fully-automatic weapons, and high capacity magazines to those who can demonstrate a legitimate need. Many low-income countries also have similar laws but lack the capacity to enforce them. The US is unique with no such laws and restrictions. The right to bear arms is embedded in its Bill of Rights and is interpreted to include all arms. 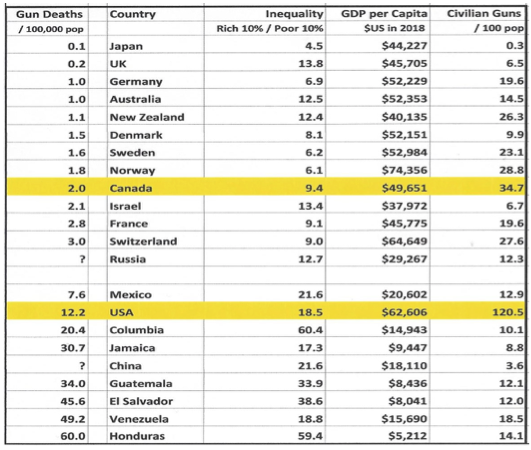 Tax policy and education are major causes of inequality and differences in economic opportunity. US tax rates (especially on investment income) have increasingly favoured the very wealthy. The Bush administration dropped the tax rate on investment income, ostensibly to create jobs. It worked. It created jobs in China and Mexico where US companies moved jobs to increase their profits. US investors got richer and US workers lost their jobs and their family’s employer-paid health care. The Trump administration wrongly blamed the Mexicans and the Chinese and gave yet another tax break to the wealthy. In most US states, schools are funded by municipalities. If you live in a wealthy municipality, you have good schools that provide a base for more opportunity, and vice versa.

The American Revolutionary War (1775 to 1783) was fought to free the new country from taxes imposed by Britain. The second amendment to the Bill of Rights was passed in 1791 to give citizens the right to bear arms and to form a “well-regulated militia” to protect themselves from further aggression. But that was over 200 years ago and things have changed. Today, the world’s most powerful military is not dependent on a militia. Today’s assault weapons have no resemblance to the single-shot muskets of 1791, and today’s civilian gun owners can hardly be called a “well-regulated” militia.

The NRA (National Rifle Association) was formed just after the 1861 to 1865 Civil War by some union military officers who were dismayed that many of their soldiers were not able to handle guns safely. Since then, the NRA has evolved into a lobby group that takes in $100 million per year; about half from gun manufacturers and half from its five million members, or one per cent of the US population. The CEO is paid $5 million per year to lead the organization in opposing every sensible piece of gun-control legislation.

The number of guns per 100 people has doubled in the USA since 1968 and their capacity to kill has increased dramatically. The mass shooter in Dayton Ohio used an assault rifle with a 100-shot magazine to fire 40 shots in the 34 seconds before he himself was shot by police.
Hugh Holland

According to a US Department of Justice report, in 2016, the US manufactured 11 million guns, imported five million (mainly from Austria, Brazil and Germany) and exported 0.4 million. Today, the US has four per cnet of the world’s population and 40 per cent of the world’s guns. According to NRA theory, that should make America the safest country in the world. But instead, the result is 40,000 gun-related deaths per year. That is 110 gun-deaths (not just shootings) every single day. We only pay attention to the mass shootings.

Some would say that what happens in the US is their business. But what happens with the world’s most powerful economy and military has profound effects (some good and some bad) on the world; and especially on their closest neighbors and trading partners.

To provide US citizens, visitors and neighbours with the level of safety expected in developed nations, the US Congress needs to pursue bi-partisan fact-based and data-based solutions to their unique gun violence problem, instead of clinging to every possible outdated excuse for inaction.

We too have work to do
The USA is likely the main source of illicit civilian guns in Toronto, but the underlying social conditions, legislation and enforcement causing and enabling their use must be improved by the governments of Ontario and Canada. We must work to prevent America’s seemingly unsolvable gun sickness from creeping further into this country.